‘Time to reach out to the other’: PM Imran urges Muslim leaders to take a stand against rising Islamophobia 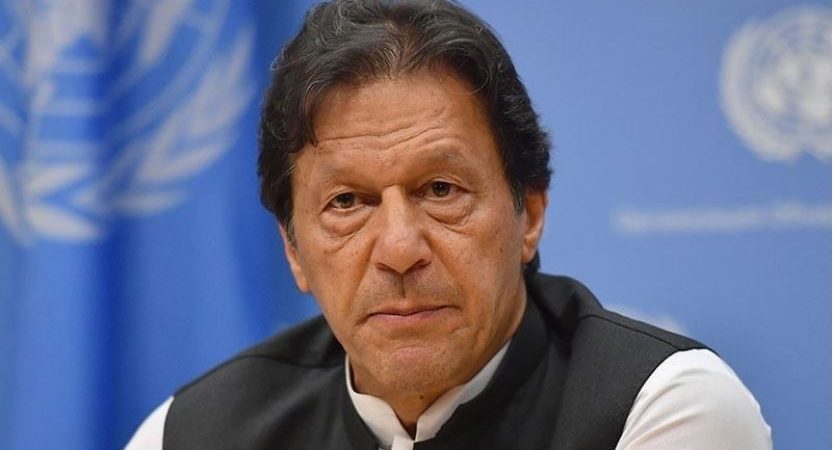 ISLAMABAD – Prime Minister Imran Khan on Wednesday wrote a letter to leaders of Muslim states, urging them to “collectively take the lead in breaking this cycle of hate and extremism” caused by Islamophobic acts and statements by leaders of Western, especially European, countries.

The letter, addressed to “leaders of the Muslim states” and dated October 28, was posted on the prime minister’s official Twitter account and comes days after blasphemous cartoons of Holy Prophet Mohammad (PBUH) were displayed on government buildings in France. The act was defended by the French president, Emmanuel Macron, who said that “Islamists want our future”. 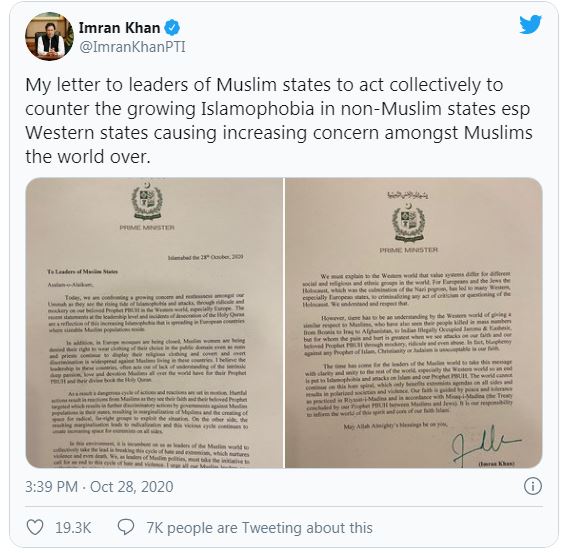 PM Imran, in the letter posted on Twitter today, highlighted the “growing concern and restlessness amongst [Muslim] ummah as they see the rising tide of Islamophobia and attacks through ridicule and mockery [of] our beloved Prophet (P.B.U.H)” in the Western world, especially in Europe.

“The recent statements at the leadership level and incidents of desecration of the Holy Quran are a reflection of this increasing Islamophobia that is spreading in European countries where sizeable Muslim populations reside,” the letter reads.

The premier said that anti-Muslim sentiment was spreading across Europe, where mosques are being closed down and Muslim women are being denied the right to wear clothes of their choice in public “even as nuns and priests continue to display their religious clothing”.

The prime minister expressed his belief that the leadership of European countries “often acts out of lack of understanding” of the respect and love the Muslim population holds for the Holy Quran and the Holy Prophet and said that their actions lead to a “dangerous cycle of actions and reactions”, which leads to further marginalisation of Muslims in those societies.

“[…] The resulting marginalisation leads to radicalisation and this vicious cycle continues to create increasing space for extremists on all sides,” said PM Imran.

The premier went on to say that it was time for Muslims leaders to come together and “break this cycle of hate and extremism, which nurtures violence and even death”.

“I urge all our Muslim leaders as a collectivity to raise our voice and explain to the leadership of the non-Muslim, especially Western states, the deep-seated reverence and love all Muslims feel for their divine book, the Holy Quran, and for our Prophet (PBUH). It is time to reach out to ‘the other’ and end cycles of violence bred of ignorance and hate,” the prime minister wrote.

He pointed out that criticism and questioning of the Holocaust — during which at least six million Jews were killed by the Nazis in the 1940s — had been criminalised by Western countries and said that the Muslim world “understand(s) and respect(s) that”.

“However, there has to be an understanding by the Western world of giving a similar respect to Muslims, who have also their people killed in mass numbers from Bosnia to Iraq to Afghanistan to Indian Illegally Occupied Jammu and Kashmir, but for whom the pain and hurt is greatest when we see attacks on our faith and beloved Prophet (PBUH) through mockery, ridicule and abuse.”

The prime minister highlighted that blasphemy against any prophet, including those of Christianity and Judaism, is “unacceptable” for Muslims. He reiterated that the “world cannot continue on this hate spiral which only benefits extremist agendas on all sides”.

Earlier today, Minister for Religious Affairs Noorul Haq Qadri had said that the premier would write letters to heads of Muslim states, stressing the need to “come up with an effective strategy to block repeated blasphemous attempts”.