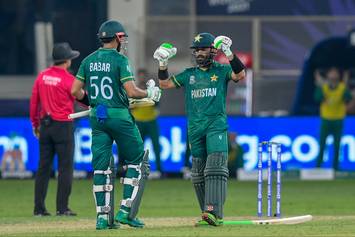 DUBAI , OCT 24 : Pakistan defeated India by 10 wickets in the Super 12 match of the T20 World Cup on Sunday at the Dubai International Stadium. India set 152 runs target for Pakistan to win at the loss of seven wickets while bating first.

The Virat Kohli-led side leads  5-0 in T20 World Cup. However, Kohli will be leading the team for the first time against Pakistan in the global tournament.

There’s no doubt that the contest between the sub-continental giants will attract global interest even beyond the cricket fraternity. But both teams, with face-offs becoming as rare as a hailstorm in the Emirates, have been trying their best to play down the pressure-cooker scenario associated with the game.

Virat Kohli, who has begun his final mission as Indian captain at T20 Cricket, said he and other members of the team see it as just another game. But he had to admit that he felt the elements around the match were different. “I just approached this game as another game of cricket and I know there’s a lot of hype around this game, more about ticket sales and ticket demand,” Kori said. Told the media last week.

Pakistan will participate in the tournament with the results of several seesaws. They defeated the West Indies 1-0 in the four-game T20I series, which was hit by the rain that washed away three games.

However, they were unable to play the five-game T20I series with New Zealand at home after losing 2-1 in England before that and New Zealand withdrawing from the tour at the last minute.

They hold most of their expectations on captain Babar Azam and wicket-keeper batter Mohammad Lizwan. Babal said he would not have in mind a record of no victory over India on Sunday. “Honestly, I don’t want to focus on the past. I’m looking forward to this World Cup. We will focus on our strengths and abilities and apply it on the day,” said the Pakistani captain.