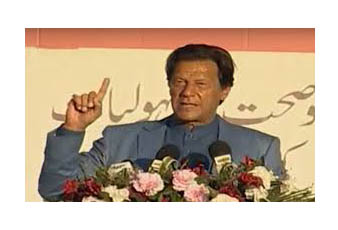 Prime Minister was addressing distribution ceremony of Sehat Insaf Card in Governor House. He admitted that wheat price hike had been caused due to government’s negligence and said that he who knows who benefited from recent wave of inflation.

He further added that the reason behind building Shaukat Khanum Hospital was because he can never forget the face of a cancer patient at Mayo Hospital.

He claimed that one of the biggest reasons behind PTI‘s two-third majority in KPK is the health cards system. For the first three to four years, the state of Madina was in great turmoil and the distribution of these health cards is just another step towards state of Madina, he added.

PM informed the participants of the ceremony that 7.2 million people will get treatment through Sehat Card.

« Private universities shut down due to govt policies: Imran Masood (Previous News)
(Next News) India asks Erdogan not to interfere in its internal affairs »