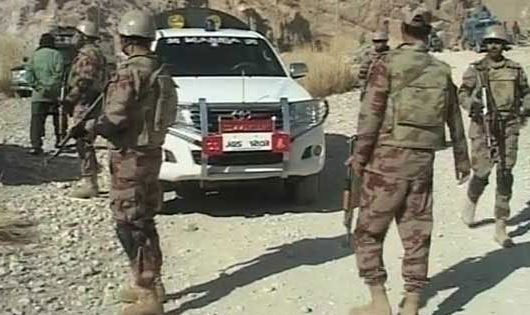 RAWALPINDI, MAR 26 /DNA/ – On information of presence of Terrorists in the general area of Nagao Mountains, near Sibbi, Balochistan, Security Forces conducted an operation to apprehend them. Once the troops started clearance operation in the area, terrorists tried to escape from their hideout and opened fire onto security forces. 6 x Terrorists belonging to BNA including Naseeb Ullah Bangalzai alias Jahangir, Pir Jan and Rakai Kalhoi have been killed in ensuing exchange of fire. These terrorists were involved in recent security incidents in Sibi and surroundings and were also linked to 20 January blast in Anarkali, Lahore. In addition, arms and ammunition have also been recovered which were intended to be used by the terrorists for disrupting peace and security in the area. During the operation, a valiant son of soil, Sepoy Nisar embraced Shahadat while another two soldiers got injured Security Forces, in step with the nation, remain determined to thwart attempts at sabotaging peace, stability and progress of Balochistan.