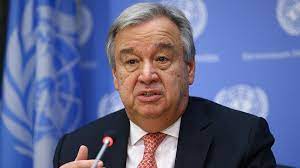 “I am deeply shocked by the continued air and artillery bombardment by the Israeli Defense Forces in Gaza,” Guterres said of the salvos that he said have killed “at least 208 Palestinians, including 60 children.”

The Gaza health ministry has put the toll slightly higher, at 230 Palestinians killed, 65 of them children.

Guterres continued that “indiscriminate firing of rockets by Hamas and other militant groups towards population centers in Israel, resulting in at least 12 fatalities including two children, and hundreds of injuries, is also unacceptable.”

The toll given by Guterres differs from that given by Israeli police, which says Hamas rockets have claimed 12 lives including one child.

“If there is a hell on earth, it is the lives of children in Gaza,” Guterres said.

The General Assembly meeting was requested by Niger and Algeria, respectively the current chairs of the Organization of Islamic Cooperation and the Arab Group at the United Nations.

“It is imperative that we achieve de-escalation, to prevent an uncontainable cross border security and humanitarian crisis,” he said, calling for the “resumption of negotiations” pursuing “a two-state solution on the basis of the 1967 lines.”