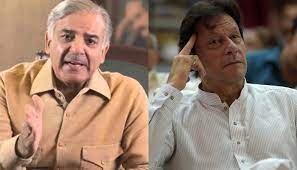 ISLAMABAD , NOV 07 : PML-N President Shehbaz Sharif on Sunday demanded that Prime Minister Imran Khan tender his resignation and face the law in the light of the findings of an inquiry report by the Election Commission of Pakistan (ECP) on irregularities in the Daska by-election.

A report released on Friday by the ECP on the February by-poll in Daska’s NA-75 constituency concluded that election officials, police and the local administration failed to play their “designated role in the requisite manner and were found [to be] puppets in the hands of their unlawful masters” during the by-election.

The report also found that police officers and officials played an “absurd” role in the by-election. It not only identified their failure in providing protection to the staff and to the polling material, but also questioned if the police conspired, maligned and consequently annulled the whole by-election.

“After an analysis of various statements of the inquiry proceedings, it could be induced that the police were either under the influence of a constant force that guided them or they deliberately remained blind to whatever was happening around them,” the report said.

In a statement today, Shehbaz said attempts were being made to rob and snatch from the people their right to elect their own representatives.

“Imran Khan Niazi must tell what is he waiting for after the ECP report disclosed everything?” he asked.

The leader of the opposition in the National Assembly also asked the premier to submit himself for accountability in the wake of the ECP report. “It requires a big heart to become [ex-prime minister] Nawaz Sharif and face the law,” he added.

Shehbaz vowed that his party would strongly resist the government’s plan to introduce electoral reforms, electronic voting machines and amendments in the NAB ordinance.

He also said the PML-N would join hands with other political parties against the government’s alleged plan to “enslave” the people of the country.

Meanwhile, PML-N senior leader Shahid Khaqan Abbasi also took the government to task over the inquiry report, and read out some of its findings about attempted rigging in the by-poll at a press conference.

He alleged that multiple government tiers from the local administration to the provincial and federal government were involved in the attempted rigging.

“This issue goes to the top [and] Punjab Chief Minister [Usman] Buzdar and Prime Minister Imran Khan will have to give answers,” he said.

The former prime minister expressed the hope that the ECP would make the report public so the people could see for themselves “what happens in our election and who steals it and how”.

“We hope the ECP will give exemplary punishments to these people. We hope the judiciary will not close its eyes on this violation of the Constitution and will take the kind of action that no one ever thinks about stealing the election.”

Terming the issue a “test” for the higher judiciary, Abbasi said if it could disqualify a prime minister for not taking a salary — referring to the disqualification of Nawaz Sharif — then it could take action on a constitutional violation as well.

“If our judiciary wants to do anything for the country then today is the test for it,” he remarked.

The controversial by-election in February this year was marred by violence, rigging and the disappearance of more than 20 presiding officers (POs), and a fact-finding inquiry was launched to probe into the irregularities.

Subsequently, the ECP had withheld the results of the by-poll and ordered re-election in the entire constituency after suspicion that the results might have been falsified. The order was later upheld by the Supreme Court.

A by-poll was held in the constituency in April, with PML-N’s Syeda Nosheen Ifti­khar winning the contest by securing 110,075 votes against Pakistan Tehreek-i-Insaf’s Ali Asjad Malhi, who had bagged 93,433.

According to the ECP inquiry report, it seemed that “a constant observatory force drove or goaded” presiding officers, who failed to perform their duties during the by-poll.

The report — submitted by Punjab Joint Election Commissioner Saeed Gul to the ECP secretary — said the statement given by the 20 POs who were “forcefully taken to some unknown places invoked the point that … facts were being concealed by the POs”.

It noted that while the said POs blamed police for the irregularities reported during the by-poll, “their statements can never justify their negligence and maladministration.”