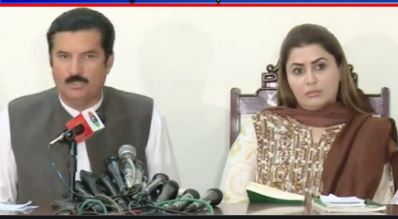 Islamabad, /DNA/ – Central Information Secretary of PPP-P Shazia Marri has said that we congratulate the entire Pakistani nation because today we have got rid of incompetent and insensitive government of Imran Khan Niazi and we ousted the selected Niazi from the power through the vote of no confidence.She said that people in the country were fed up due to highest rate of inflation, youth are unemployed and PTI government didn’t provide any relief to the people.Selected Imran Khan was ousted constitutionally and by the democratic way. PPP Chairman Bilawal Bhutto Zardari was struggling for two years to remove incompetent selected Imran Khan through  democratic and  constitutional manner and Chairman Bilawal Bhutto Zardari held a long march against the selected Niazi and finally succeeded.This she said while holding a press conference along with PPP leader Faisal Karim Kundi hereon today in Islamabad. Ms Marri said Chairman Bilawal Bhutto Zardari hold a Awami long march against the selected and last night  PTI did dramas to cling to power at the time when no-confidence motion was moved to oust the selected Imran Khan in a constitutional manner.The PTI tried to violate the constitution and the law which was thwarted.She said that PPP rendered sacrifices for the supremacy of constitution and law in the country and always spoke about protection of the Constitution of Pakisatan and law.Imran Niazi is now provoking the people and is trying to sell false statements. She added that Imran Khan should be held  accountable for his bad policies and decisions of the government before provoking the people because country cannot afford further divisions.
Imran Khan praised the nation of India as much as their own Prime Minister of India did not praise ever, it was regrettable and we can expect anything from such incompetent Selected Imran Niazi. Indian Prime Minister Modi’s hands are stained with the blood of Kashmiris and we will not allow Imran Khan to leave the country. On this ocassion, Faisal Karim Kundi congratulated the entire nation over the success of no confidence motion and end of the Imran Khan rule. He said that Article 6 should be applied against those PTI leaders who violated the constitution. He said that PTI team was present in the parliament yesterday but their captain did not come and ran away from the session.He added that we will not pursue a policy of revenge and we are ready to go along with the opposition on country issues. Imran Khan was begging for NRO till the last minute at night.If PTI members will resign tomorrow or today, we are ready to hold by-elections today.

« U.S. will supply Ukraine with ‘the weapons it needs’ against Russia (Previous News)
(Next News) Political parties agree on electoral reforms: Kaira »