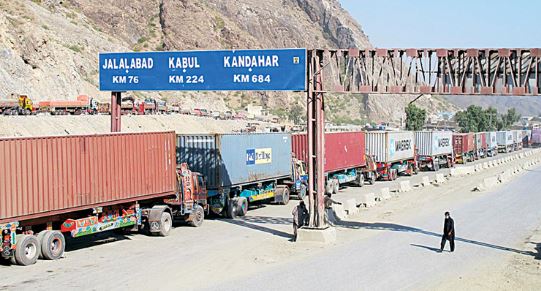 PESHAWAR, JAN 17 – The Government of Pakistan has begun implementation of its new policy regarding bilateral trade with Afghanistan, whereas payment in US dollars was made mandatory for the Afghan importers exporters from January 13th. As a result traders and officials confirmed another blow to bilateral trade between the two neighboring countries in the wake financial and economic crises erupted in already war stricken Afghanistan after the empowering of Taliban on August 15.

The Customs officials in Peshawar confirmed that according to the State Bank of Pakistan, the traders and Customs clearing Agents went on token strikes and agitation against the new policy. However, a high ranking Customs Department official said that grievances of traders have been conveyed to the federal government high ups in this respect.

Whatever might be the claims and expectations of authorities concerned, implementation of new trade policy for Afghanistan has cast very bad impacts on bilateral trade between the two neighboring countries. Joint Secretary of Pakistan Afghanistan Zia Ul Haq Sarhadi said that so far, they are engaged in clearing of all goods trucks earlier listed with trade and customs officials at the Torkham and other crossing points and no one from Afghanistan is willing to make more deals. He said that due to the international community including US sanctions almost all banks in Afghanistan are faced with crises.

The official data at Torkham reveals that a total of 1284 trucks loaded with goods from Pakistan entered Afghanistan from January 9 to January 15. During this period the number of vehicles coming from Afghanistan registered as 1304.  However, the officials confirmed that almost all trucks and trailers entering Pakistan from Afghanistan are empty back. Only during the session of fresh fruits and vegetables, imports are stated on rise from Afghanistan.

Customs clearing agents and traders in Torkham say that in the past, especially before the border restrictions imposed in 2016, the number of vehicles loaded with commercial goods passing through Torkham between Pakistan and Afghanistan was between 4,000 and 5,000.

Zia-ul-Haq Sarhadi, Joint Secretary, Pak-Afghan Joint Chamber of Commerce and Industry, said that the two countries’ traders have started token strikes and protests against the SBP’s policy at Torkham, Kharlachi, Ghulam Khan and Angor. He added that so far clearance of already goods trucks either still across the border in Afghanistan or in pipelines are returning whereas no one from Afghanistan traders is willing to go for further deals and booking.

Sarhadi recalled that earlier the Afghan traders were allowed to either get US dollars in Peshawar and other currency markets or to arrange transactions from the UAE. But now they are bound to deposit US dollars in Pakistani banks. Pakistan has already opened branches of various banks including National Bank of Pakistan at Kabul. Likewise Bank of Khyber and National Bank of Pakistan branches are in function around the clock at Torkham and other crossing points for the purpose.

Zia-ul-Haq Sarhadi said that after the Taliban came to power, foreign countries neither recognised nor started trade and business transactions with Afghanistan, as a result of which there are no dollars in Afghanistan and implementation of SBP’s new policy is impossible. In this respect, he called on Prime Minister Imran Khan to direct the concerned authorities’ for re-visiting trade policies with Afghanistan.

Highlighting the bad impacts of bilateral trade  Zia Sarhadi said that the daily export and import of one and a half thousand containers with Afghanistan is up to one hundred and fifty and demanded that the Pakistani government review the new policy of Afghan trade.

Khyber Pakhtunkhwa Chief Collector Customs Ahmad Raza Khan told media persons that Pak-Afghan is committed to  implement the SBP’s new policy on trade with Afghanistan, which according to him would lead to generating of foreign exchange in exchange in return of exports. Pakistan is considered the most easy destination of exports for Afghanistan.

Ahmad Raza Khan said that according to the new policy, Afghan traders will get Form E by bringing dollars with them.  And only traders who show dollars at border crossings will be able to export after getting E Forms. However, Ahmad Raza Khan said that the economic condition of the new government of Afghanistan is weak and the purchasing power of the Afghan people has waned.  He also confirmed that Pakistan’s exports have declined by 26% in the last four months.

Replying to a question, Ahmad Raza Khan said that Pak-Afghan traders have been informed about the difficulties faced by the traders and traders’ grievances in this respect conveyed to the federal government in Islamabad.

So far there is no reaction or stance on the decline of bilateral trade  or token protests of traders and customs agents on new trade policy from the federal and Khyber Pakhtunkhwa governments But two days ago Barrister Muhammad Ali Saif, Information Adviser to the Chief Minister of Khyber Pakhtunkhwa.  He visited the North and South Waziristan border crossings and. reiterated the government’s commitment to boost bilateral trade with Afghanistan.