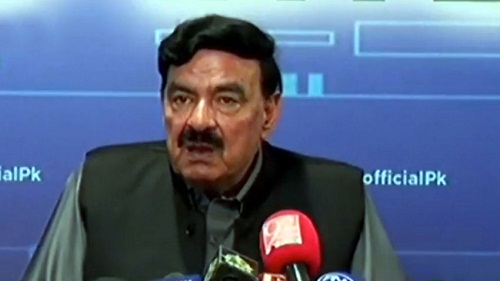 Islamabad : Minister for Interior Sheikh Rashid Ahmad has said that funds of two billion rupees are being released to further upgrade the cyber security system.

Addressing a presser in Islamabad on Monday, the Interior Minister said this will help induct technical people for the cyber security. He pointed out that there has been an increase in cyber threats with about one hundred thousand complaints received in his tenure.

The Interior Minister said it has also been decided to introduce e-passports in the country. Sheikh Rashid said a summary is being forwarded to the federal cabinet for approval to add fifteen more countries in the list whose citizens will be provided with visas on arrival. He said these countries include the United States, Canada, France and Iran.

Sheikh Rashid said those behind cancellation of the visit of New Zealand cricket team will be exposed soon and FIA is working on it.

As regards political situation, the Interior Minister said the PML (N) will face further fissures in its ranks in the days ahead.

Replying to a question the interior minister said that good news will be shared with the nation regarding the use of Electronic Voting Machines as it is the demand of the nation not government.