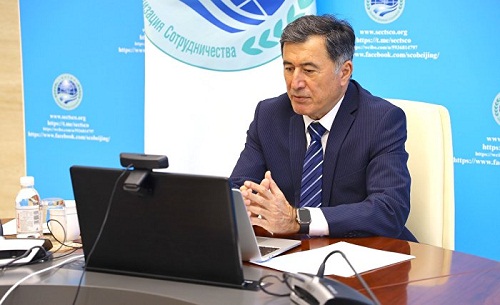 Vladimir Norov the Secretary-General of the Shanghai Cooperation Organisation took part in the opening ceremony of the SCO Friendship and Cooperation Centre in Tajikistan.

In his welcome address, the SCO Secretary General Vladimir Norov praised the decision of Tajik President H.E. EmomaliRahmon to opening the center aimedto develop cooperation and friendship among member states, and to strengthen centuries-old traditions of harmonious co-existence between different nationalities and religions.

Speaking on the fundamental meaning of such notions as friendship and cooperation, the Secretary General stated that the SCO nations are united by many objective factors which has laid down a solid foundation for successful development of mutually beneficial relations.

Today’s realities unequivocally confirm the need for joint efforts of the government and public organizations of the countries to preserve the SCO space for future generations as a stable, secure, and prosperous region.

The Development Strategy of the SCO till 2025 specifically says that the SCO Member States will promote cultural and humanitarian contacts among non-governmental organizations, non-commercial associations and citizens of the Member States, development of dialogue among civilizations with involvement of observer states and SCO dialogue partners”, noted V. Norov.

At that it was stressed that creation of Committees of Good Neighborhood, Friendship and Cooperation or other mechanisms with similar functions in the SCO region would promote this process.

In this regard, according to the SCO Secretary General, establishing practical interaction between similar structures in Tashkent, Dushanbe, Beijing, Bishkek and other capitals will have a great synergistic effect which would strengthen the institutional framework of cultural and humanitarian cooperation within the SCO, as the largest regional organization in the world which will undoubtedly serve to strengthen mutual trust, international and interfaith accord, friendship and good neighborliness between our countries and nations, as well as expand interaction between the peoples of the SCO.

Emphasis was placed on the relevance and symbolic significance of the establishment of the Center in Tajikistan.

The SCO Secretary-General particularly noted that the current third presidency of Tajikistan of the Organization coincides with the 20thanniversary of SCO, which will be marked under the motto “20 Years of SCO: Cooperation for Stability and Prosperity”. The launch of the Center as a new platform for cultural and humanitarian cooperation entirely reflects the intention of the Tajik Chairmanship to make a worthy contribution to the development SCO architecture.

Mr. Norov emphasized that the opening of the Center in the Year of SCO’s anniversary is also a landmark contribution of the Republic of Tajikistan to the development of cultural and humanitarian cooperation, which will enable to make maximum use of the richest cultural, historical, spiritual, moral, and artistic-aesthetic potential and heritage of our countries and peoples.

According to the Secretary-General, the pandemic has shown that the coronavirus knows no state borders and is a common enemy of all peoples across the world. In this regard, he expressed confidence that there is no alternative to joint international cooperation based on the principles of friendship, mutual assistance, and good neighborliness in organizing an effective fight against the pandemic.

In conclusion, having expressed confidence that the work of the SCO Friendship and Cooperation Centre in Tajikistan will be rich, and the ideas and projects initiated will be interesting, useful, and meaningful, the Secretary General expressed the SCO Secretariat’s readiness to provide all possible assistance in fulfilling the objectives set for the newly established institution.

The head of the SCO Center for Public Diplomacy in Uzbekistan,KabuljonSabirov also spoke at the opening ceremony. In his address, he noted that the initiative to create this important mechanism within the Shanghai Cooperation Organization is quite relevant and is in the interests of sustainable and sustained socio-economic development of the SCO nations. Today the SCO countries, relying on the principles of “Shanghai spirit”, take an active part in further development of inter-civilization and inter-religious dialogue.

The parties expressed readiness to participate in the development and implementation of joint projects and scientific and educational activities.

She noted that Tajikistan made an important contribution to strengthening friendship among nations, deepening good-neighbourliness and friendship among peoples of the SCO countries by establishing the Centre.

It is convinced that close interaction between the institutions in Tashkent, Dushanbe and the Committee in Beijing will strengthen the foundation of friendship and mutual understanding for continuous development of the SCO and building a stronger united destiny of the SCO community.

“Strength in Cohesion. The doors to cooperation on people-to-people diplomacy are open to all SCO countries. We invite all parties to cooperate closely and develop together,” said Zhen Wei.

Assistant to the President of the Republic of Tajikistan Latifzod, SCO Ambassadors to Tajikistan and representatives of the Tajik Foreign Ministry also attended the event.

Other participants of the opening ceremony also noted the importance of establishing the Centre and expressed readiness to develop cooperation with the SCO Secretariat and the Centre for the benefit of the peoples of the SCO countries and jointly strengthen the “Shanghai spirit”.