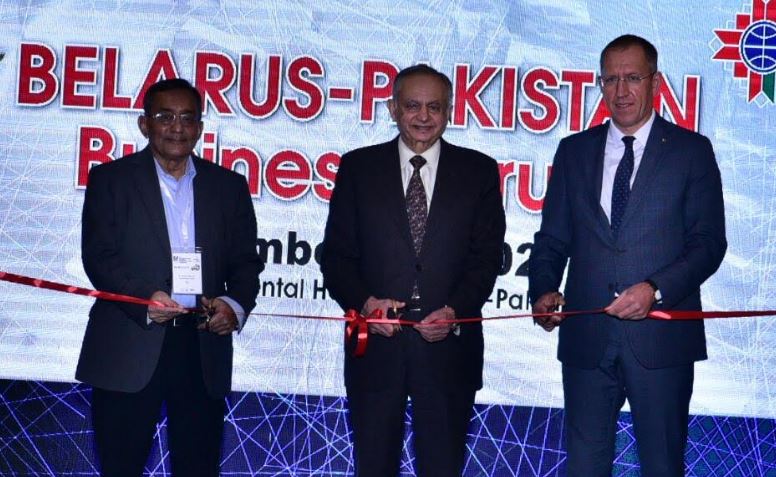 KARACHI: Advisor to Prime Minister on Commerce, Textile and Industry, Razzak Dawood along with H.E  Mr. Andrei Metelitsa, the Ambassador Republic of Belarus inaugurated Belarus-Pakistan Business Forum here on Wednesday.
Advisor to Prime Prime Minister has said the agreement signed with Belarus at the International Trade and Industrial Fair (ITIF) was of utmost importance, which would promote advanced education in the country.On the second day of the event,  Lakhani’s University signed three agreements with institutions in Belarus.

Razzak Dawood said Afghanistan’s regional connectivity would increase in a couple of months, which would also benefit Pakistan’s external trade.”Economic development in Afghanistan would directly impact Pakistan , and Prime Minister Imran Khan has categorically advised to increase trade with the neighboring country.”

Minister said the economy was heading in the right direction post-covid.”Presence of foreign delegates at the fair proved the confidence of international community in Pakistan’s ability to deal with the pandemic.He informed that Pakistan was increasingly tapping the non-traditional markets adding, he would soon Nigeria in this regard.Advisor appreciated E-commerce Gateway and said the organisation was playing an active role in promoting exports.A large number of local and foreign visitors appeared on the second day of the fair at a local hotel.Vice President E-commerce Gateway Umair Nizam said the turnout surpassed their estimates by 50 percent.He said the citizens visiting the fair observed all SOPs.