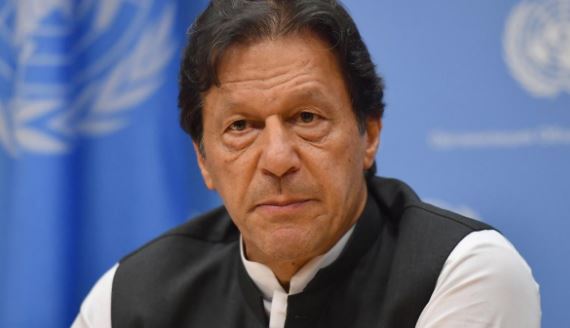 PTI to move SC against CM Punjab’s recount verdict: Imran
Says PTI candidates receiving phone calls from unknown numbers for changing loyalties
Staff Report
ISLAMABAD: Pakistan Tehreek-e-Insaf (PTI) Chairman Imran Khan made it clear that PTI would approach apex court against the Lahore High Court (LHC) verdict pertaining to Chief Minister Punjab’s vote recount.
Speaking at a ceremony titled ‘Regime Change and it’s fallout on Pakistan, organized by Islamabad High Court Bar Association (IHCBA) here on Thursday, Imran Khan said as how could Hamza remain the CM when the court declared the electoral process through which he came into power was as flawed.
He said that what’s going in the largest province of the country for the last two and half months but no one bothered to take notice of it situation.
He reiterated that the Election Commission of Pakistan (ECP) lost credibility, as pre-poll rigging were being carried out in the Punjab, and the PTI candidates were receiving phone calls from unknown numbers and being advised against running on PTI tickets but ECP unmoved.
Imran Khan said that the government’s own allies raised fingers over the local body elections in Sindh, where police were used. However, he warned that Punjab elections would be more chaotic, as situation in Punjab was different from Sindh.
Imran Khan said that the current imposed government was disastrous for the country and its institutions, hence the only way to get the country out of the prevailing untold crises was to hold early, free and fair polls.
He said that major problem of poor countries was that the powerful remained unpunished, as they looted billions of dollars every year with complete immunity.
Imran Khan said that gravity of the situation could be judged that $ 7,000 billion of poor countries were lying in offshore companies.
He said that big robbers have been given a clean-chit in Rs. 1,100 billion corruption cases because all facilities were being given to the ruling class.
Talking about cipher, PTI chairman said that it was mentioned if Imran Khan was not fired, Pakistan would face the consequences.
“No self-respecting country will ever get such a cipher, as the threatening message is an insult to the country,” he added.
Imran Khan said that soon afterward, a political atmosphere changed altogether and his government allied jumped the ship and turncoats surfaced all of a sudden.
He said that they now admitted on the floor of the house as from where they were getting the phone calls.
Therefore, he pressed that there should be a judicial inquiry of the cipher so as such mistakes could not be repeated; however, the regime change beneficiaries resisted it.
Imran Khan said that the corrupt people suited the US, because they could be easily controlled despite the fact that corrupt person even cannot be kept as a peon in America.
Shaukat Tarin and I also told neutrals that there would be political instability if the conspiracy succeeded because it would have severe implications on the country, he added.
He said that the plan was going on for a year, but it was unbelievable that Shahbaz Sharif and Asif Ali Zardari would come back to power, who ruled the country for 30 years but did nothing except loots and plunders.
PTI Chairman said that he kept on saying from day one that these thieves would gang up against him and would start blackmailing him to get NRO.

Talking about Pakistan’s decision to join the US war on terror, Imran Khan said that he understood the West better than these people, as there was no permanent friend and foe in international politics but only interest, which was evident from Pakistan’s huge sacrifices in the war on terror, as the US never appreciated our great sacrifice.
Imran Khan said that if these thieves were to be brought to power then Pakistan did not need any enemy.
“Our government was also in the IMF program. We were also under pressure, but we neither overburden the masses nor created such a chaotic situation and everything was going quite smoothly, he added.
However, he said these thieves reversed all hard gains and kept on destroying the state institutions to protect their own skins.