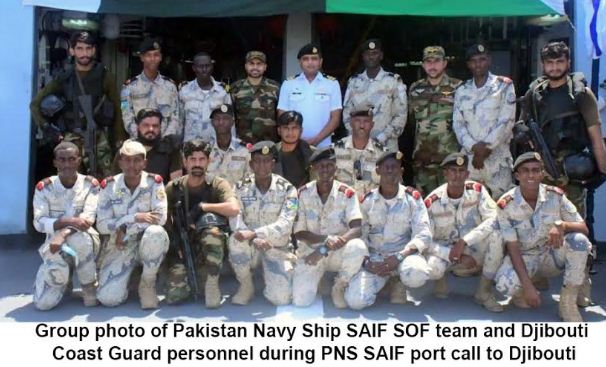 PNS SAIF is presently on deployment at North Arabian Sea & Gulf of Aden and is contributing towards international efforts to ensure maritime security in the region.

During the interactions, matters of mutual interest were discussed and further enhancement of bilateral ties in all spheres was re-affirmed. Harbour exercises were also arranged for Djibouti Coast Guard personnel to demonstrate PN capabilities to conduct Maritime Security Operations.

President of Djibouti Parliament along with ministers and parliamentarians also returned Call and visited PNS SAIF.

Pakistan Navy believes in promoting stability in the region and has remained committed to maritime security and order at sea. The visit of PNS SAIF is aimed to further strengthen bilateral ties and enhance interoperability among both navies.=DNA