PM Imran says foreign money being used to topple his govt, claims to have evidence in writing 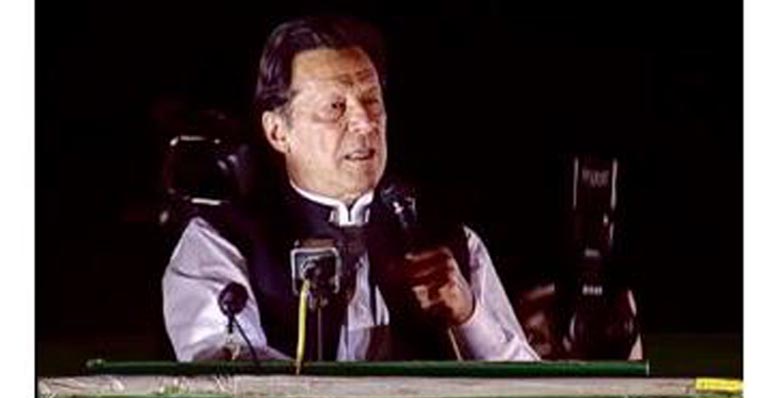 The prime minister took the podium after his fellow PTI leaders took turns addressing their party workers and supporters, who have assembled at his call ahead of a no-trust move against him in the National Assembly.

“First of all, I thank my nation. The way you turned up on my call from all corners of Pakistan, I appreciate you from the bottom of my heart,” PM Imran said in his opening remarks. “I also pay tribute to my team of parliamentarians as ‘you were offered money and attempts were made to bribe you but you made me happy and I am proud of you.’

“I want to speak my heart out and I want you to listen to me quietly. I invited you for Amr Bil Maroof to emphasise that our Pakistan was built on the ideology of Islamic welfare state. We had to build the country on the basis of Riyasat e Madina.

“Shah Mehmood Qureshi had said [in his speech earlier that] there is an external interference in Pakistan … I will speak about it later. [First], you must understand that we cannot become a nation until we stand by our actual ideology.

“I want to clarify that I also did not know the ideology of Pakistan for quite some time. I left for abroad at the age of 18. As I began to understand the religion, I noticed that the orders of Allah to the Holy Prophet (PBUH) were implemented more in the West.

“In Britain, free medical treatment, free education, unemployment benefits, and free legal aid is given to the people. Our Prophet had created Riysat-e-Madina where the state had taken responsibility of its people.”

The prime minister recalled what he said were his government’s measures to alleviate the burden on the public.

“We are providing loans to families for housing, technical education and small businesses. As soon as our tax was enhanced, I announced a subsidy and reduced rates of petrol and ‘Fazlur Rehman’,” he said. “I also offered a subsidy in power tariff. I promise I will spend more money on my people as our government collects more capital in taxes.”

The prime minister linked his crusade against corruption with the teachings of the Holy Prophet (PBUH).

“Our Prophet had also emphasised for the supremacy of law. I don’t give them NRO because my Prophet had explained that nations get destroyed when you punish the poor and exempt the rich.

“Poor countries are backward because the law there fails to catch the rich who are involved in white collar crimes. They transfer stolen and looted money to offshore accounts. Small thieves do not destroy a country like the way big thieves do.”

“These ‘three stooges’ are looting the country for years and all this drama is being done to have Imran Khan surrender like Musharraf. They are trying to blackmail the government. General Musharraf tried to save his government and gave these thieves NRO and it resulted in the destruction of Pakistan.”

“Come what may, I will not forgive them even if my government goes or even if I lose my life,” he added.

PM Imran explained the reason why today’s gathering was named Amr Bil Maroof. “The meaning of Amr Bil Maroof is that a nation is bound to wage jihad against the evil and support the good. In Britain, two million people took to the streets during Iraq war. That was Amr Bil Maroof and this is what alive nations look like.

“I called you here because attempts are being made to bribe people. They decided to dislodge our government by claiming that Pakistan is being destroyed. I challenge that no government gave a performance like we did in our three and a half years.”

The premier listed a series of policy decisions taken by his government which he said benefited the country greatly and would continue to do so in future.

The premier had arrived at the venue in a helicopter as footage shared on the PTI’s Twitter account showed a large crowd in attendance, with buses and cars lined up outside.