PDM’s protest on March 23 will bring govt to its end: Fazlur Rehman 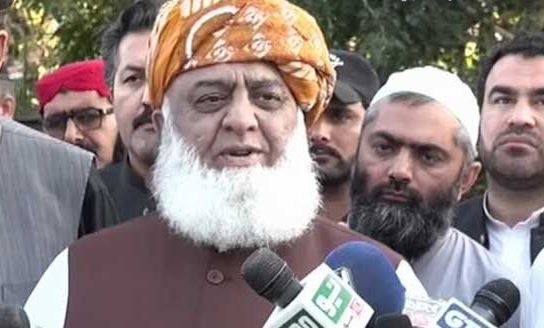 He said this while addressing a press conference on Sunday in Peshawar. Fazlur Rehman stated that the government has brought inflation, poverty and economic instability to the country.  Criticizing the mini-budget, he mentioned that the state bank will go under the custody of IMF while the government will have to take the debts from commercial banks.

Addressing the conference he added that he along with Shehbaz Sharif will lead mass demonstrations against the government in Islamabad. PDM has never considered PPP and ANP its rival parties. He added that PDM is independent.

Fazlur Rehman further added that it is Nawaz Sharif’s country, he should return back. Afghanistan needs peace and Pakistan should play its pivotal role in trying to bring peace to the country. Earlier a week ago, Jamiat Ulema-i-Islam-Fazl (JUI-F) chief Maulana Fazlur Rehman had announced to reach Karachi on a two-day visit.

The provincial meeting of PDM Sindh was held at the residence of Shah Awais Noorani in which important decisions was taken regarding the long march towards Islamabad on March 23. .  =DNA