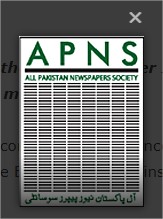 KARACHI (DNA) -The APNS has expressed its dismay on the consistent indifference of the Federal Government in making payment of media dues before Eid despite clear instructions by the Prime Minister Mr. Imran Khan.

Hameed Haroon, Present and Mr. Sarmad Ali, Secretary General of All Pakistan Newspapers Society in a statement have stated that the Committee on Media Issues headed by Senator Shafqat Mahmood which held its meeting on April 16, 2020, had decided to effect payment of outstanding dues to media houses, so that the newspapers could pay salaries of their employees before Eid. It must be noted that the PID has verified an amount of Rs.1.25 Billion approximately as payable to Print Media but so far only a payment of about Rs.7 Million has been released on account of advertisements in newspapers. From this negligible amount the salaries of employees cannot be paid.

The APNS expresses its profound concern and alarm that despite lapse of about one month, the concerned ministries and departments have not made the payments. Since there left just 3 working days before Eid and payments not being made, the media houses would not be able to pay salaries to their employees who would for the first time celebrate their Eid without bare necessities.

The All Pakistan Newspapers Society has requested the Prime Minister Imran Khan to personally intervene and help the media workers.=DNA