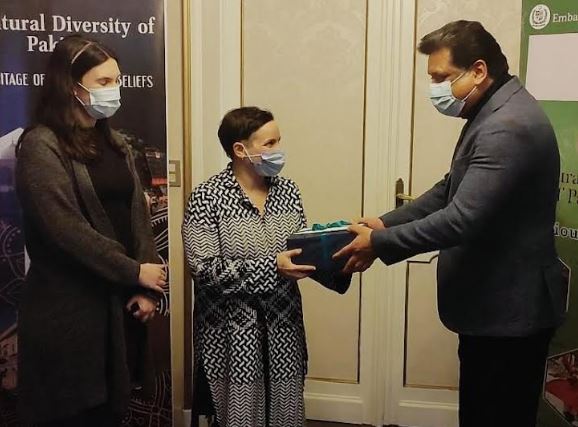 Brussels, JAN 26 /DNA/ – The Ambassador of Pakistan to Belgium, Luxembourg and the European Union, Mr. Zaheer A. Janjua received a delegation of international artists from the project “Terre d’Origine” (Earth of Origin) at the Embassy in Brussels, today.

Welcoming the delegation, Ambassador Janjua underscored that Pakistan was a land of rich culture and diverse traditions. From Gandhara civilization in the north to Mohenjo-Daro in the South, Pakistan inherited one of the most culturally diverse civilizations.

The Ambassador briefed the delegation about  historic importance of the archaeological site of Bhir Mound, which was one of the oldest remains of ancient Taxila from the period 800-525 BC and is listed on UNESCO World Heritage Site.
Ambassador Janjua also highlighted the tourism potential of the country, stating that Pakistan was home to the sacred sites of Buddhism, Sikkhism and Hinduism. He elaborated on the steps taken by the government to promote religious tourism, including opening of the Kartarpur Corridor in November 2019.

The Ambassador invited the delegation to visit Pakistan to personally experience the beautiful landscapes, heritage sites, diverse culture and rich cuisine of the country.

The Ambassador also presented an earth sample from Bhir Mound to the delegation, which would be featured in the project Terre d’Origine, in which 173 countries from all over the world will participate.

The delegation, which included the lead artist Ms. Sandy Flinto and project incharge Ms. Gergana Stefanova, thanked the Ambassador for presenting the earth sample from Bhir Mound and participation in the project.
The artistic project Terre d’Origine is an art project in the field of performing visual arts, which will be exhibited during the Culture Night in Esch-sur-Alzette, Luxembourg in September 2022.