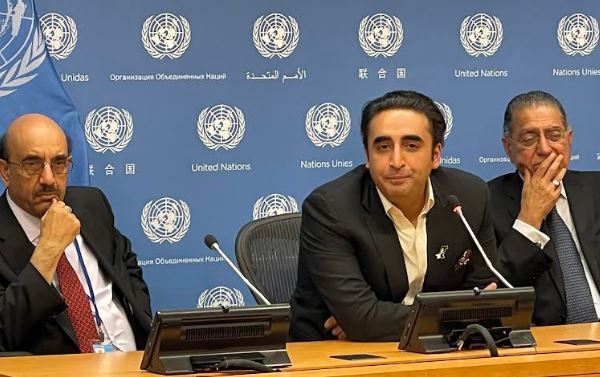 NEW YORK, MAY 20 (DNA) — Foreign Minister Bilawal Bhutto Zardari says Pakistan has always played a proactive role to ensure peace and stability in the region as peaceful coexistence is one of main objectives of our foreign policy.

Talking to media in New York on Friday, the Pakistani Foreign Minister said that Islamabad adopted an integrated strategy to counter terrorism and formulated an effective National Action Plan to tackle extremism and terrorism in country.

“As far as the question of our relationship with India is concerned, it is particularly complicated” by New Delhi’s actions in Kashmir – firstly the August 5, 2019 decision to unilaterally annex Jammu and Kashmir and now the delimitation commission move aimed at turning the disputed state’s Muslim majority into a minority, he told the press conference before his departure for Islamabad.

“Having said that, we are very cognizant of the fact that economic activity, dialogue, diplomacy are ultimately the ways and means for countries to engage with each other and resolve disputes,” the foreign minister said in reply to a question.

“I just note that, particularly at the moment, given this aggressive, hostile behaviour, the practical space for that happening is very limited,” he said.

He said that India has openly violated the international laws and resolutions passed by the United Nations regarding Indian Illegally Occupied Jammu and Kashmir by taking illegal and aggressive measures in occupied territory. He said the solution to the Kashmir issue is essential for peace and stability in the South Asian region.

Talking about Afghanistan’s humanitarian crisis, the Foreign Minister called for joint and collective efforts to address Afghan crisis. He said that international community must play its role in resolving the issue.

He said Pakistan has always helped Afghan people in every difficult time and hosted millions of refugees. He warned the world that escalation of the Afghan crisis will affect the entire region.

Replying to a question, he said he would like to pivot away from single-issue transactional relationship with the United States as he seeks to repair ties with Washington.

“Our relationship with the United States has been coloured too much by the geopolitical context in our region, and particularly by the events and circumstances in Afghanistan,” the foreign minister said.

“We would like to pivot away from a transactory relationship, a one point agenda relationship, to a more broad-based relationship with a particular emphasis on trade,” he said a day after meeting the U.S. Secretary of State.

“We seek to have a more have a more broad-based relationship that encompasses all the dynamics of our friendship,” Bilawal said, “which would have, obviously, a political component, a people-to-people component and the defence component, but most importantly, the economic component as far as the Biden administration is concerned.”

Bilawal said he hoped to pursue a range of bilateral initiatives with his U.S. counterparts aimed at exploring “untapped opportunity” for students, entrepreneurs and other sectors of both societies to interact with one another.

And he cited his recent interactions with Secretary of State Antony Blinken as indicating a good start for launching such projects. US State Department spokesperson Ned Price said in a statement on Wednesday after Blinken and FM Bilawal met that the two officials affirmed a “shared desire for a strong and prosperous bilateral relationship.”

The foreign minister also said he was not concerned about competing with neighboring India when it came to ties with Washington. The United States and India are part of a Quad security grouping of nations with Australia and Japan.

“Pakistan is not insecure about our relationship with the United States and we believe that the world is big enough for both Pakistan and India to exist,” he said. To another question, the foreign minister defended former Prime Minister Imran Khan’s visit to Russia, saying “it is very unfair to punish Pakistan for such an innocent action”.

“We are not part of the conflict. We do not wish to be a part of the conflict,” he said, adding that Islamabad will continue to emphasize the importance of peace, dialogue and diplomacy to resolve this Russia-Ukraine conflict “as soon as possible”. “We will certainly not take the side of any aggressor.”

Former PM Imran has claimed that the US punished him for pursuing an “independent foreign policy”, particularly on Ukraine. To a question on the domestic political situation, Bilawal said “on the international front, we have a foreign policy vacuum.

On the economic front, we have an economic catastrophe staring at us in the face, and we have a highly polarized political society. “We need to now do the work of the government, work together to take the difficult decisions and implement the necessary reforms so we can move forward.

And I believe, as long as we do that, and as long as we conduct ourselves in that way, then there is very little to challenge the new government and this extensive coalition. But if we fail to do our own job, then we will face many challenges.”