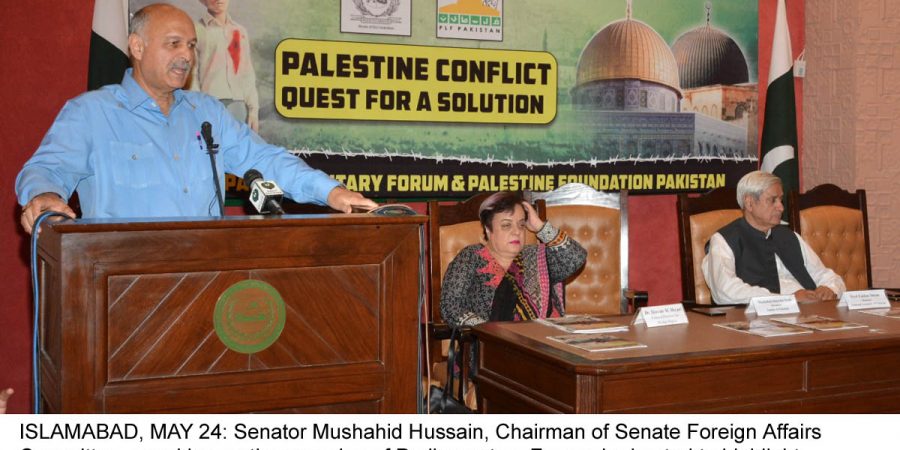 ISLAMABAD, MAY 24 (DNA) – The Parliamentary Forum on Palestine, Kashmir and Rohingya (PKR) hosted by Senator Mushahid Hussain, Chairman of the Senate Foreign Affairs Committee organized a seminar on Palestine which was addressed by Federal Minister for Human Rights, Dr. Shireen Mazari and Chairman of the Parliamentary Committee on Kashmir, Fakhar Imam as well as Senator Afrasiab Khattak and Senator Farhatullah Babar. The seminar was attended by diplomats as well as parliamentarians, students and civil society activists. In his opening remarks, Senator Mushahid Hussain referred to the vision of the Quaid-i-Azam, Mohammad Ali Jinnah who gave a categorical commitment of support to Palestine in several of his speeches before the creation of Pakistan and even during the famous March 23 Lahore Resolution, there was a special resolution based on Palestine passed by All India Muslim League. The Quaid-i-Azam also supported the Kashmir cause very vigorously.  Senator Mushahid Hussain also criticized the ethnic cleansing of the Rohingya muslims. Dr. Shireen Mazari in her speech strongly supported the issue of Palestine and condemned the nexus between India and Israel and she also categorically said that in no circumstances would Pakistan recognized Israel as this would weaken Pakistan’s stand on Kashmir. Fakhar Imam said that the Kashmiri peoples resistence was heroic and had the support of all civilized peoples. Senator Afrasiab Khattak said that the Kashmiri right of self-determination was inalienable right and right thinking people supporting this just cause and he as well as Senator Farhatullah Babar said that the Kashmiri struggle should not be weakened as it was just and principled. Representative of Kashmir, Sh. Tajammal Islam and the Arakan Rohingya Union (ARU), Dr. Rafiq Ahmed also attended on special invitation. Senator Mushahid Hussain also announced that a delegation of the Al-Quds Parliament based in Istanbul would be visiting Pakistan in the last week of June on the invitation of Pakistan Senate.=DNA =========
PAKISTAN, WORLD No Comments »