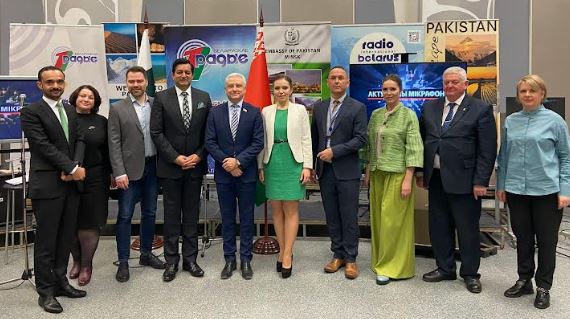 Minsk, MAR 18 /DNA/ – As part of the National Day of Pakistan celebrations and to commemorate the 28th Anniversary of the establishment of diplomatic relations between Pakistan and Belarus, the Embassy of Pakistan in Minsk in collaboration with Belteleradio Company organized a comprehensive event on 17 March 2022.
The programme included a Round table discussion covered political, parliamentary, economic, education and culture areas of mutual cooperation with the participation of prominent speakers from diverse fields. H.E. Mr. Sergey Rachkov, Chairman of the Standing Commission on International Cooperation & Internal Security of the Council of the Republic spoke about the parliamentary cooperation between the two countries, while Mr. Igor Voytov, Rector of State Technological University and Ms. Natalia Karchevskaya, Rector of the State University of Culture and Arts also shared their thoughts on the prospects of cooperation between the two countries. Ms. Julia Arabey, Deputy Head of South East Asia and Middle East of “Minsk Tractor Works” spoke about ongoing cooperation in Industrial area.
While, the Ambassador of Belarus to Pakistan H.E. Andrei Metelitsa addressed the event virtually, Ambassador Sajjad Haider Khan spoke about the friendly bilateral ties between Pakistan and Belarus and broached about ways and means to further broaden the friendly relations.
One of the most important activity of the event was the musical performance the Symphonic Orchestra of Belteleradiocompany who made a live performance of the National Anthem of Pakistan and the Mili Naghma “Jeway Jeway Pakistan”. Pakistani dance performance by Tamazur Dance School of Minsk and Urdu song “Dil Dil Pakistan” by Belarusian singer Tatiana Kremis were also part of the special event.