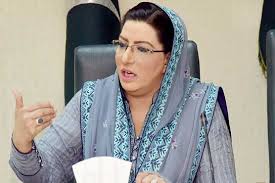 Talking to media outside Parliament house, she said that Turkish President has helped Prime Minister Imran Khan in highlighting the longstanding Kashmir issue at international forums.

She said Ankara has always supported Islamabad in difficult times and it has strengthened Pakistan’s narrative at the international fora including Organisation of Islamic Cooperation and United Nations.

She said that playing role of a brother, Turkey always helped in protecting Pakistan’s interests. She said now these decades-old brotherly bilateral relations have been transformed into strategic partnership

She said now the focus was on further expanding economic and trade partnership for the benefit of the generations to come. She said that Turkey would help Pakistan in transfer of technology.

She said that arrival of Turkish First Lady Amina Erdogan along with President Erdogan would encourage Pakistani women to come forward and play their role in nation building process.

She said that Pakistan and Turkey enjoyed time-tested brotherly relations based on shared religious and cultural values.

She said that Pakistan Prime Minister Imran Khan has taken the initiative of promoting peace in the region and Islamic world and Turkey cooperation in this regard would be effective and meaningful. = DNA