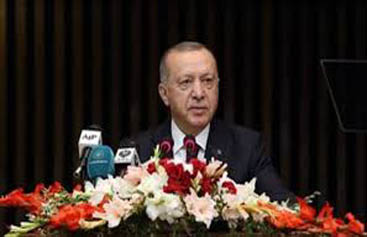 ISLAMABAD, FEB 14 (DNA) :  Turkish President Recep Tayyip Erdogan addressed a joint session of the Parliament in Islamabad on Friday (today) which had been summoned by President Dr Arif Alvi and affirmed that Pakistan-Turkey relations are admirable for the entire world.

Recep Tayyip Erdogan said it is an honor to address this House and thanked Pakistan for providing him with the opportunity. I am grateful for the hospitality and it feels like home here, he said.

“Pakistan and Turkey share common religion, culture and values. Our friendship has evolved in love and affection. We share each other’s joys and sorrows.

“The spirit of the Muslims of the subcontinent to get freedom is unforgettable and Kashmir holds the same significance for Turkey as it has for Pakistan.

“I assure my support for Pakistan before the Financial Action Task Force (FATF) despite pressure. I thank Pakistani nation for supporting Turkey in every hour of need.

“Economic progress is not achieved in some days. It becomes possible only after continuous hard work. I have come to Pakistan with a big group of investors as environment for trade is becoming conducive here after steps taken by the Pakistan government.

“I salute Pakistan’s efforts against terrorism. The international community has left Syria alone whereas Turkey is investing $ 40 billion on Syrians to protect them from atrocities.

“It is our religious and moral duty to stand by the oppressed Muslims. The Turkish army has been fighting against separatist organizations for 35 years.

“Turkey will stand with Pakistan in future as well and I pray that the love between both countries lasts forever.”

Recep Tayyip Erdogan was received by Prime Minister Imran Khan when he reached the Parliament House. The members stood up to welcome their guest upon his arrival.

Earlier on Thursday, Pakistan and Turkey agreed to extend mutual support on issues of each other’s core national interest and underscored the importance of fully realizing the immense potential of relationship between the two countries.

The understanding was reached at meeting between President Dr Arif Alvi and his Turkish Counterpart Recep Tayyip Erdogan in Islamabad. They also underlined transforming this relation into a strong and dynamic trade and economic partnership.

Welcoming the President Erdogan to Pakistan, Dr Alvi expressed gratification over the level of enhanced and multifaceted engagement between the two countries.

He said that the 6th Session of High Level Strategic Cooperation Council will further strengthen and broaden the fraternal relations between Pakistan and Turkey.

A warm welcome was accorded to the Turkish President and First Lady of Turkey Emine Erdogan over their arrival at the presidency. President Arif Alvi later hosted banquet in honour of the distinguished guests.

Erdogan was accorded a warm red-carpet welcome when he arrived on a two-day official visit.

Prime Minister Imran Khan received the Turkish leader at the Nur Khan Airbase. Senior Pakistani officials as well as the Turkish Ambassador to Pakistan were also present on the occasion.

The Turkish President was also presented a guard of honour during an official welcome ceremony held at the Prime Minister House. National anthems of the two countries were also played on the occasion.