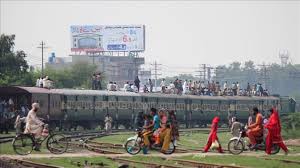 ISLAMABAD, Aug 18 (APP):In a bid to accommodate passengers, Pakistan Railways has a network of 96 mail and express trains, running all over the country to better felicitate the commuters.

Pakistan Railways at present was operating as many as 96 mail and express trains over the entire railway network in which various facilities were provided to the passengers.

“The department is operating 19-38 Mail/Express, 18-36 intercity, 9-18 passenger trains and 2-4 Shuttle train over the railway system,” an official told APP.

Besides these facilities, he said procedures were adopted to address public complaints promptly under Prime Minister’s Citizen Portal which was being updated on daily basis.

The official said train managers travelling in mail and express trains resolve issues of passengers during the journey. “Establishment of public facilitation counters at stations, are working round the clock to address passenger’s complaints.”

He said online resolution of Pakistan Citizen Portal complaints was being handled from the Headquarters and operating divisions. The registered complaints were also provided at stations.

The official said the passengers and general public can launch complaints through Pakistan Railways website. The complaints received from above sources were being processed on priority basis and feedback was given to the complainant. To a question, he said 21 major railways stations have been provided with boundary walls including Rohri Jacobabad, Karachi Cantt, Karachi City, Quetta, Sibi, Mach, Kolpur, Multan Cantt, Khanewal, Lahore, Faisalabad, Wazirabad, Gujrat, Gujranwala City, Kot Lakhpat, Mughalpura, Rawalpindi, Hassan Abdal, Chaklala and Golra Sharif. However fencing all over the railway track and stations on main line has been proposed in the ML-I project