Karachi: /DNA/ – Kalim Farooqui, Chairman of Pakistan Japan Business Forum was honoured with a commendation award by the Consul General of Japan, Toshikazu Isomura at his residence. At a simple but graceful ceremony, it was attended by members of his immediate family, current Senior Vice Chairman PJBF, Tetsuya Suematsu, former chairmen of PJBF, Abdul Kader Jaffer and Sohail P. Ahmed, former Secretary General, Majyd Aziz, Director, Feroz Shah, Chairperson of PJCA, Saadia Rashid and Farooqui’s  company colleagues at Technology Links (Pvt.) Limited.
PJBF was launched on February 6, 2001.  It aims to encourage & enhance mutual understanding and friendly relations between the industrial and business communities of Pakistan and Japan. It further promotes Joint Ventures, initiate partnerships including for SMEs by taking delegations to Japan every year,  provide technical expertise and organize exhibitions, trainings and seminars in close collaboration with Japan External Trade Organization (JETRO) & Japan International Cooperation Agency (JICA), the two important organizations having their separate offices in Pakistan with Japanese nationals as CEO’s. Twenty years to the year, PJBF takes pride in playing a vital role as a bridge between the business communities of the two friendly countries; now to celebrate 70 years of diplomatic relations next year (1952-2022).
The Consul General appreciated the services of Kalim Farooqui and presented him with the sheild in recognition of his significant contribution in the field of business between Pakistan and Japan. He elaborated upon the various achievements which contributed in presenting the commendation shield.
Thanking the government of Japan for the honour conferred, he reiterated to continue his endeavours in bringing the business communities of the two friendly countries even closer. He explained about his regular sojourns to Japan since 1981 and his interaction with the Japanese business world and his association with PJBF of which he is a founding and an active member. He was elected as the Chairman of PJBF in 2019 having worked in different capacities since its formation in 2001. 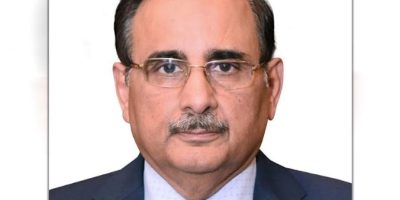