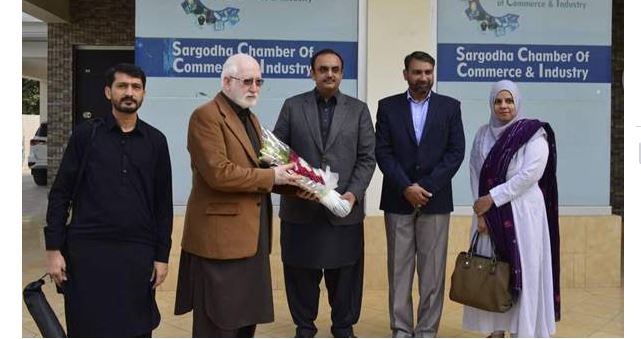 SARGODHA, /DNA/ – PAJCCI held its stakeholder meeting in Sargodha to further the cause of trade and economy as well as to include all stakeholders playing critical role in trade with Afghanistan.

PAJCCI delegation was led by Qazi Zahid; Director who updated participants about continuous efforts of PAJCCI and its Chairman, Zubair Motiwala who has taken the concerns of business community to the level of Prime Minister. Motiwala also raised issue of undue valuation of Pakistan’s citrus fruit by Afghanistan with his counterpart Khan Jan Alokozai who along with Afghan Union of Fresh Fruit traders met with Afghan Minister for Industry and Commerce to request the support of Afghan government in resolving the issue on urgent basis.

President Sargodha Chamber of Commerce & Industry; Shoaib Ahmed Basra; informed that currently citrus consignments are held in Afghanistan due to high tariff and blocked access to CARs in clear violation of agreement. At present 150 containers of 35 tons each is stranded in Afghanistan and is likely that product will rot resulting in huge loss to traders, farmers and national treasury while increasing shortages in Afghanistan and price increase for consumers.

He also gave recommendation to sign FTA with Afghanistan as the trade balance is 80% whereas FTA with China is already resulting in devastating effect on Pakistan economy. He strongly suggested that Afghanistan must rationalize the tariff and give clear access to CARs, whereas Pakistan side should give priority clearance to perishable items, trading in PKR, encourage barter trade, resume Cash on Counter policy for supporting both the economies.

PAJCCI has been consistently raising the concerns on both sides of border and has strongly urged both governments to take immediate steps in resolving chronic issues.  Zubair Motiwala has sought intervention of Honorable Prime Minister Imran Khan to instruct State Bank of Pakistan, Federal Board of Revenue and Ministry of Commerce to annul the notification waiving Cash on Counter facility and continue to extend the facility till Afghan banking system becomes operational and Afghanistan gets access to its foreign reserves that are halted.

The socio-economic uplift of both countries is intertwined and both governments must realize the importance of current dynamics, both sides must support each other and encourage joint policy decisions for trading. The negligence at this point will increase the hardships of Afghan people, compromise security of new regime, damaging regional balance and global acceptability.

On behalf of business community, Zubair Motiwala requests Prime Minister for a call on meeting to deliberate upon issues which are having devastating effects on businesses and arrive at plausible solutions for restoring confidence of stakeholders across the border.