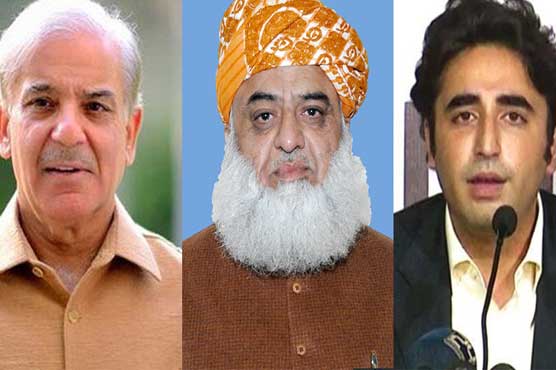 ISLAMABAD , NOV 05 : Opposition leadership on Friday agreed to record strict response inside and outside the parliament over worst inflation and sharp rise in petrol prices in the country.

The opposition leaders also discussed matters pertaining to joint session of the parliament.

They also held consultations regarding the NAB Amendment Ordinance and also discussed strategy to challenge the NAB laws inside and outside the parliament.

The leaders also agreed that the people were not ready to bear the burden of inflation and this government and want to get rid of the incumbent rulers.

“The people and country’s economy would not survive if PTI remain in power,” they said.

Earlier, Pakistan Muslim League-Nawaz (PML-N) president and opposition leader in National Assembly (NA) had said that increasing the prices of petrol is a barbaric move taken by the government to create more problems for the poverty-stricken people.

PML-N leader Hamza Shahbaz said that Prime Minister (PM) Imran Khan was not worried about the problems of the nation. Pakistan Tehreek-e-Insaf (PTI) government has once again increased the prices of petroleum products without thinking about the survival of the general masses.

He went on to say that People were dying due to inflation but Bani Gala ‘prince’ is not taking it seriously.

Meanwhile, PML-N spokesperson Marriyum Aurangzeb said implementation on PM’s package has been started to cause more troubles for the people.

On the other hand, Miftah Ismail said that the government is not implementing actual relief package. Petrol prices have been increased after the address of PM, he stated.

The reactions came after government on late Thursday night jacked up the price of petrol by Rs 8.03 per litre with immediate effect.

According to a notification issued in this regard, the new price of petrol will be Rs 145.82 per litre against the current rate of Rs 137.79 per litre.

The price of high-speed diesel (HSD) has also been enhanced by Rs 8.14 per litre and will now cost Rs142.62 per litre.