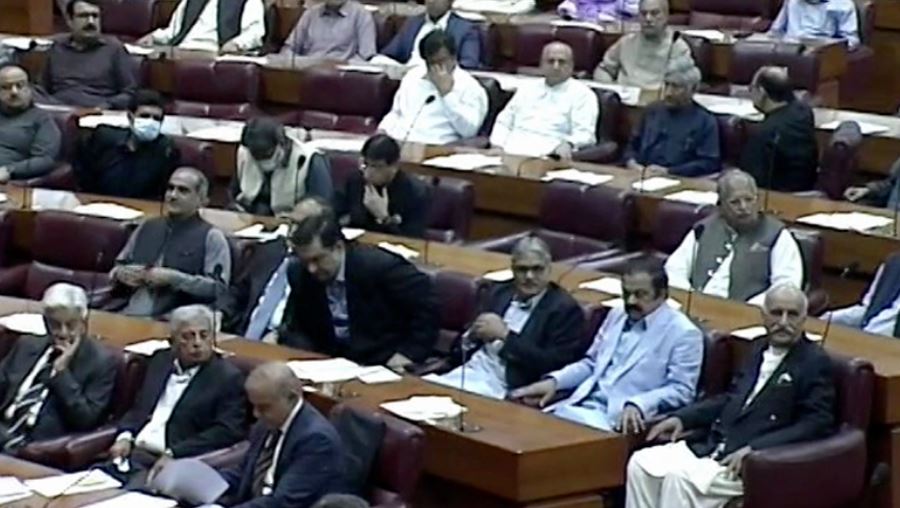 ISLAMABAD, APR 9: The National Assembly session to decide the fate of Prime Minister Imran Khan via voting on a no-confidence motion against him stands adjourned yet again. It was expected to resume at 9:30pm after Isha prayers but appears to have been delayed.

The current adjournment was the fourth of the day as the opposition’s clamour for immediate voting throughout the day have fallen on deaf ears amid lengthy speeches delivered from treasury members on the floor of the house.

NA Speaker Asad Qaiser was chairing the session when it began at 10:30am sharp in the morning, in accordance with the Supreme Court’s directives, and with the recitation of the Holy Quran. It was followed by the national anthem and prayers for the recently deceased mother of MNA Shazia Sobia.

However, Amjad Ali Khan Niazi chaired the session for a brief period when it resumed after the first adjournment before Qaiser returned. The post-Iftar session was again chaired by Niazi.

Voting on the no-confidence motion against the prime minister is the fourth item on the day’s agenda but it has yet to happen.

While the opposition came out in full force, very few members of the treasury benches were in attendance before the session was adjourned. Prime Minister Imran Khan was also not present.

The opposition needs the support of at least 172 lawmakers from a total of 342 to oust the premier through the no-trust move.

A meeting was held between the treasury and opposition benches in the speaker’s chamber after the session was adjourned for the first time in the day, where the latter called for holding proceedings according to the Supreme Court’s directives.

Following this, a meeting of the opposition’s parliamentary group was called at the opposition leader’s chamber. PML-N’s Khawaja Saad Rafique, speaking in the NA after the adjournment, said that the speaker had promised that voting would be held after Iftar.

Separately, the government sent a review petition to the apex court against its decision to set aside the deputy speaker’s April 3 ruling. The petition, however, is yet to be filed since the officers of the court did not process it on receipt as they close early in Ramazan. According to the PTI’s counsel Azhar Siddique, it will be processed on Monday.