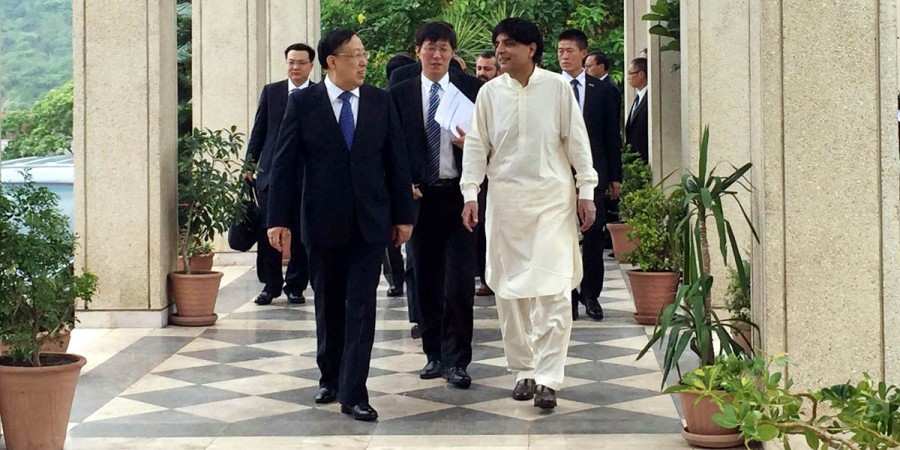 ISLAMABAD, JUL 14 (DNA) -Interior Minister Chaudhry Nisar Ali Khan said that Pakistan’s expanded cooperation with China in the field of counter terrorism, security, intelligence sharing, and trade would arguably be a defining partnership in 21st century for his country.

The Interior Minister expressed these views here on Thursday during a high-powered meeting with visiting Minister for State Security, Peoples Republic of China Mr. Geng Huichang.

The meeting covered a broader scope of discussion for increased coordination between security establishments of two countries in intelligence sharing, counter terrorism coordination, and security of the China-Pakistan Economic Corridor (CPEC).

The Interior Minister maintained that “secure and successful completion of CPEC would add new dimensions to our friendship cementing our economic as well as strategic bond.”

He maintained that CEPC would also help Pakistan and China expand their trade footprint in the region and beyond.

“CPEC is not only the flagship project between the two countries but also focuses on strategic depth in Pak-China relationship,” interior minister was quoted as saying by the spokesperson for the ministry.

The Interior Minister said that both sides must be cautious about regional and global powers who do not want to see CPEC for their own interests.

The interior Minister reiterated that Pakistan, at all levels, is committed to thwart all conspiracies against CPEC.

The interior minister remarked that Pakistan would continue its fight against all the terrorist groups who creates disturbance and generates violence in Pakistan.

He said that Pakistan is committed for not allowing any group to use its territory for violence abroad.

Regarding the security of the Chinese citizens working across Pakistan in different development projects, including CPEC, the interior minister pointed out that a Special Security Division is already working under Pakistan Army to secure the lives of Chinese workers.

The Minister for Ministry of State Security, Peoples Republic of China Mr. Geng Huichang meanwhile, appreciated the efforts of Pakistan in the fight against terrorism specially the gains achieved under operation Zarb-i-Azb.