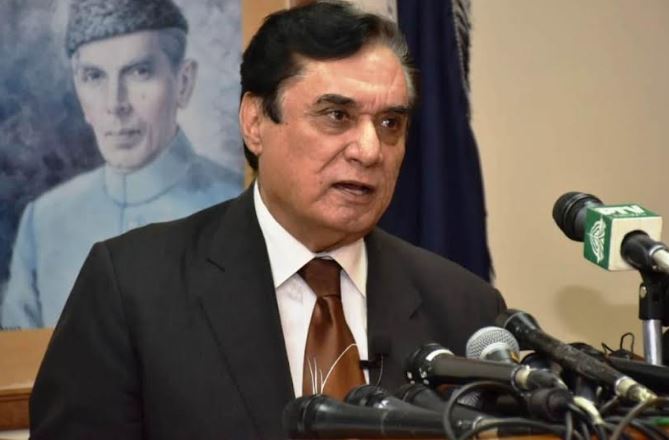 ISLAMABAD, NOV 28 /DNA/ – Justice Javed Iqbal Chairman NAB has said that NAB has filed 1270 corruption references in Learned Accountability Courts after obtaining concrete and solid documentary evidence besides statements of witnesses which are also attached in the references filed in different accountability courts.
An organised and baseless propaganda is being launched by some elements against NAB due to its effective pleading of corruption references in the Learned Courts where in the last four years, 1194 culprits were awarded sentences by Learned Accountability Courts as per law on the basis of concrete evidence submitted by NAB in the Learned Accountability Courts. The sentences to corrupt elements by Learned Accountability Courts is ample proof of the unflinching resolve of NAB officers who are performing their duties with complete professionalism, dedication and commitment. He said NAB officers are committed to continue performing their national duties sans caring about any criticism of some elements.
NAB Chairman said that NAB is an anti-corruption institution, which has no affiliation with any political party, individual or group but the state of Pakistan.
He said in the last four years, NAB had not only taken action against all those untouchables, questioned about their illegal actions, including assets beyond known sources of income and money laundering. Calling these untouchables and asking about their corruption in the past is a distant dream.
He said those who looted public money will have to answer about their deeds. The corrupt elements accused NAB of victimisation, whenever the bureau demanded money trail of possessing assets beyond means.However law will take its course in that regard. NAB urged the media to kindly obtain NAB’s point of views from Spokesman NAB before airing/publishing news related to NAB especially news related to sub judice cases etc.