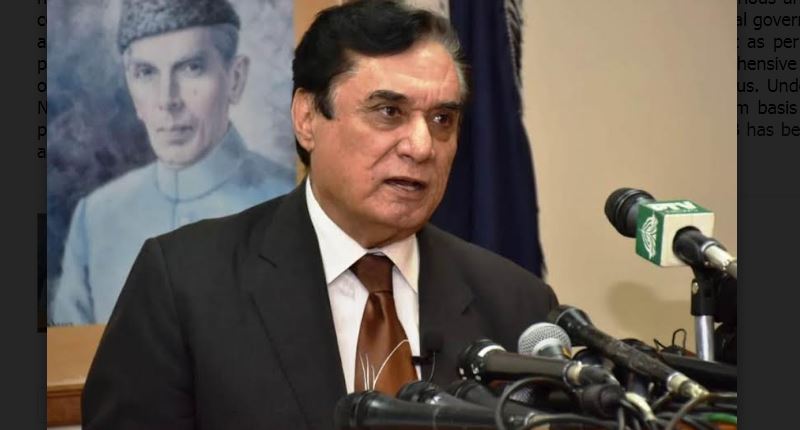 ISLAMABAD: Dec 31 /DNA/ – Justice (R) Javed Iqbal, Chairman NAB has said that NAB had filed references against big fish on the charges of corruption, corrupt practices and money laundering on the basis of solid evidence  which were laundered in the names of ‘falooda wala’, ‘chhabri wala’ and ‘paupar wala etc. The people who are claiming about their innocence in the media should better request the concerned learned Accountability courts to have hearing of their cases on a day to day basis so that they plead about their innocence where law will take its own course of action. NAB would continue performing its national duties without caring about any baseless media reports and propaganda against NAB as an institution as per law.

He said that NAB is committed to the logical conclusion of mega corruption cases by utilizing all available resources as per law. He said that NAB had constituted a Combined Investigation Team (CIT) to benefit from the collective wisdom of senior supervisory officers. He said the CIT had the services of director, additional director, investigation officer, legal counsel and experts of the monetary and land revenue department which is lending quality. He said NAB was the focal institution of Pakistan under the UN Convention against corruption and the chairman of SAARC Anti-Corruption Forum. He said NAB was considered a role model organization in SAARC countries. The Chairman said that NAB from Oct 2017 to Ovt, 2021 has recovered Rs 538 billion directly and indirectly from corrupt elements which is a record achievement as compared to other years which shows a commitment and dedication of NAB officers towards performance of their national responsibilities in eradication of corruption from the country. He said that 1264 corruption cases are under trial in various accountability courts of the country. NAB is the focal organization of Pakistan under the United National Convention against Corruption (UNCAC). Pakistan is the only country with whom China has signed a memorandum of understanding (MoU) for eradication of corruption.  The performance of NAB is being reviewed regularly on the basis of a monitoring and evaluation system so that it could be improved further. He said that youth is our future; NAB has signed an MOU with Higher Education Commission in order to aware youth about the ill effects of corruption in universities and colleges at an early age. Under this initiative, NAB has successfully established more than 50 thousands Character Building Societies in various universities and colleges besides constituting prevention committees in consultations with respective provincial and federal government departments in order to assist them to identify and plug loopholes in order to check corruption. He said that as per Gillani and Gallup survey, 59 percent people have shown trust upon NAB. He said that NAB has devised a comprehensive Quantified Grading System in order to further improve the performance of NAB Headquarter and all Regional Bureaus. Under Quantified Grading System, NAB Headquarters and Regional Bureau’s are being evaluated on annual and midterm basis at a given criteria which has proved very successful in increasing the performance of NAB. The performance of NAB has been lauded by reputed national and international institutions.