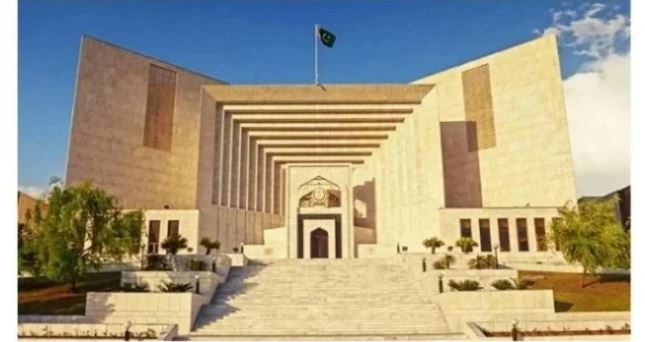 ISLAMABAD: The Supreme Court on Tuesday adjourned the hearing of the case — filed against the “unconstitutional act” of the National Assembly Deputy Speaker Qasim Suri — till tomorrow (Wednesday).

Suri had disallowed the vote of no-confidence against Prime Minister Imran Khan on Sunday — a move that the Opposition said was a blatant violation of the Constitution.

During the hearing, CJP Bandial also directed NA speaker’s counsel Naeem Bokhari to present the minutes of the crucial NA session held on March 31 to debate on the no-confidence motion against Prime Minister Imran Khan.

At the outset of the hearing, PPP Senator Raza Rabbani walked to the rostrum to present his arguments.

“This is a civilian coup. A stance was created through an alleged cable which is based on malafide intent,” the Senator said, adding that the no-confidence motion against the prime minister was tabled on March 28 but the NA session was adjourned.

He maintained that Suri gave the ruling without putting the documents before the parliament on Sunday.

He argued that Rule 28 says the deputy speaker cannot give a ruling even if he has the authority.

“Deputy speaker’s ruling is illegal […] no-trust motion cannot be rejected without voting on it,” Rabbani said.

He further stated that the deputy speaker’s ruling doesn’t have constitutional security under Article 69.

“Voting is mandatory within the given duration as per the Constitution”.

PPP’s counsel said that the no-trust motion cannot be rejected under the Constitution.

“It can be dismissed only when if those who submitted it take it back and the speaker can reject it only after voting is held on it.”

Rabbani went on to say that President Arif Alvi didn’t need to file the reference seeking interpretation on Article 63A. Instead, he should have advised the prime minister to go for voting on the motion filed against him.

Rabbani requested the court to seek the minutes of the National Security Committee meeting and the cable.

He also requested to form a judicial commission to probe into NA proceedings and asked for a stay on Sunday’s assembly session case.

“The court should consider the misuse of authority instead of the proceedings within the assembly and see whether the speaker can apply Article 5.”

Rabbani concluded saying that they want that the arguments are completed and the court issues a brief order today.

“[We] will release an order if all the parties complete the arguments,” the chief justice said in response.

He narrated the NA’s proceedings since the session of March 28 when leader of the Opposition Shahbaz Sharif was allowed to table the no-trust resolution against PM Imran Khan till April 3, the day fixed for voting on the motion.

Khan said that a debate had to be held on the no-trust motion on March 31’s session under Rule 37 but it didn’t happen.

He asked if Suri, as the deputy speaker, had the authority to dismiss the resolution in this way.

“The entire case is based on the question whether the deputy speaker can give such a ruling,” he added.

Khan contended that majority of the MNAs supported the resolution of no-confidence against PM Imran Khan as 161 lawmakers favoured it.

Moreover, he said that the session couldn’t be further adjourned after a motion of no-confidence is filed against NA Speaker Asad Qaiser.

Justice Akhtar inquired if Article 69 encompasses the NA Rules regarding the authorities of the speaker.

At this, Khan said that NA Rules for running the assembly affairs and no rule contradicts the method stated under Article 95.

Justice Akhtar inquired if Articles 91 and 95 give the speaker the Constitutional security over the procedural defect.

Khan responded to the query by saying that the deputy speaker doesn’t have the authority to reject the no-trust motion therefore Suri has committed Constitutional manipulation.

“The Constitution is silent on the procedure of submitting a no-confidence motion,” Justice Akhtar remarked.

He asked if the speaker loses authority after a motion of no-confidence bearing support of 20% MNAs is filed and he could only hold polls on the motion after that.

At this, Khan replied that Article 95 doesn’t apply if it is assumed that no member supports the prime minister except for the speaker.

The PML-N counsel maintained that the speaker’s ruling is unconstitutional as it is against Article 95, therefore it can be reviewed.

“Only the House can decide if the prime minister can continue to serve his post or not.”

Justice Mandokhel inquired if the court can review the ruling passed by a deputy speaker.

“Can a judicial review reverse the speaker’s ruling or investigate the illegal acts regarding the no-confidence motion,” he asked.

To this, Khan responded positively saying that the apex court can review an unconstitutional ruling and nullify it.

At this, Justice Akhtar inquired: “Does the Constitution say that the SC can issue a verdict on every illegal act committed within the Parliament?”

“You are opening the doors of court for the Parliament’s proceedings after which the court will have the authority to interfere in the Parliament’s affairs over petty issues. There will be piles of cases if the apex court started ruling out the NA proceedings or rulings,” he added.

On Monday, the apex court heard the arguments by PPP’s counsel Farooq H Naek who contended that Suri’s ruling in Sunday’s session was meant to deliberately avoid the voting process in the Assembly.

During the hearing, CJP Bandial directed Naek to argue how the deputy speaker’s ruling is illegitimate.

The CJP asked how the speaker could give a ruling on whether the motion was legal or illegal. “Does the speaker have no authority to reject the no-confidence motion?” he asked.

ISLAMABAD: PML-N President and Leader of the Opposition in the National Assembly Shahbaz Sharif on Tuesday asked Chief of Army Staff General Qamar Javed Bajwa and DG ISI to present evidence before the nation on whether the Opposition leaders have committed treason.

Speaking to journalists outside the premises of the Supreme Court, Shahbaz reiterated that none of the Opposition leaders have committed treason. “We did not invite any foreign power and neither are we involved in any foreign conspiracy,” he said, adding that this issue should be clarified.

“I demand COAS and DG ISI to take notice of this issue and produce evidence in the Supreme Court if we have committed treason,” Shahbaz said, adding that he has never spoken such clear words before. The PML-N leader said he will also present this request in front of the Supreme Court, “we will put this demand forward through our lawyers that please review this matter and create a forum in which the matter is clarified.”

Recalling their previous demands, he said: “We have been raising this issue for last three-and-a-half years that this government and the prime minister is illegal.”

He complained that when the joint Opposition submitted a no-confidence motion against Prime Minister Imran Khan practising its constitutional right the former PTI-led government raised the issue of “foreign conspiracy.”

The Opposition leader said: “It is now time for the army officials, who have made innumerable sacrifices, to clarify whether the National Security Committee (NSC) passed a resolution in which the role of Opposition in the ‘foreign conspiracy’ is stated.” Replying to a question regarding the formation of the caretaker government, the PML-N leader said that he has not received President Arif Alvi’s letter in this regard, adding that first, they want the Supreme Court to resolve the issue of the unconstitutional step taken by the president and prime minister and then they [the Opposition] will talk about other matters.

He said that if the matter isn’t resolved, the country will become a “Banana Republic”.