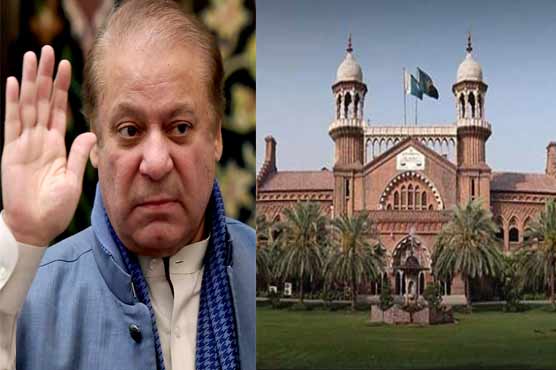 LAHORE (DNA) – The Lahore High Court (LHC) will resume today (Friday) the hearing of an application filed by the Pakistan Muslim League-Nawaz (PML-N) for the removal of former premier Nawaz Sharif’s name from the Exit Control List (ECL) without any conditionality ‘imposed’ by the federal government.

PML-N lawyer Amjad Pervaiz told the court that Nawaz has been granted bail on medical grounds but federal government has still not removed Nawaz Sharif’s name from ECL. He said Nawaz had come back to Pakistan leaving ill wife behind.

He said there are court decisions removing those from ECL who have gained plea bargain. He appealed to the court to issue an order for removing Nawaz’s name from ECL.

The court asked federal government to submit its response and adjourned hearing till Friday.

Earlier, PML-N’s legal team prepared an application pleading with the court to order removal of Sharif’s name from the ECL without any conditionality, including submission of surety bonds and only one-time stay abroad for four weeks on medical grounds.

The federal government, the interior ministry and others have been named as respondents in the application.

Sources told the media that advocate Amjad Pervez filed the application in the court on behalf of PML-N President and Leader of the Opposition Shehbaz Sharif.

The application maintained that former prime minister Nawaz Sharif has been granted bail on medical grounds; however the interior ministry has not removed Sharif’s name from the no-fly list.

It further recalled that Sharif, despite of being convicted, left his ailing wife [in the UK] and returned back to Pakistan with his daughter. It stated that there is no prohibition in removing the name from the ECL in the light of the bail granted to Sharif.

The application pointed out to previous courts’ rulings that names of convicted persons, who entered plea bargain agreements, were removed from the ECL.