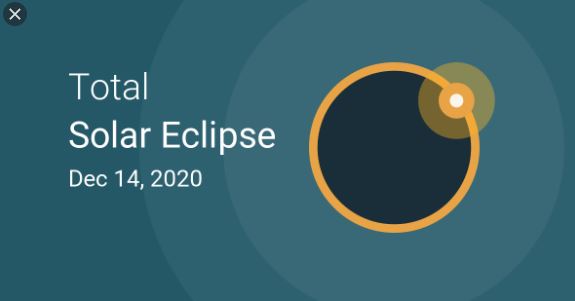 KARACHI, DEC 04 (DNA) –The last solar eclipse of 2020 would be observed globally on 14 December, the second time in a year, Pakistan Meteorological Department (PMD) said Friday.

According to the met department, the second and the last solar eclipse of 2020 could not be observed in Pakistan. It could be seen in other parts of the globe including South Africa, countries in South America, and other parts of the world.

The solar eclipse could also be observed in areas falling near the Indian Ocean, Atlantic Ocean, and Antarctic Ocean. It is pertinent to mention here that the annular solar eclipse, popularly known as the ‘ring of fire’ was witnessed in different parts of Pakistan on June 21 this year.

Annular eclipses occur when the Moon — passing between Earth and the Sun — is not quite close enough to our planet to completely obscure sunlight, leaving a thin ring of the solar disc visible. They occur every year or two, and can only be seen from a narrow pathway across the planet.

A solar eclipse always occurs about two weeks before or after a lunar eclipse, when the Moon moves into Earth’s shadow. Lunar eclipses are visible from about half of the Earth’s surface. The last lunar eclipse, which was also not visible in Pakistan, was witnessed on November 30.

It was at its peak at 2:42 pm and ended at 4:53, the met department said while terming it a penumbral lunar eclipse, something different from a complete and partial eclipse. The lunar eclipse was visible in South and North America, Australia and some other countries of Asia. = DNA