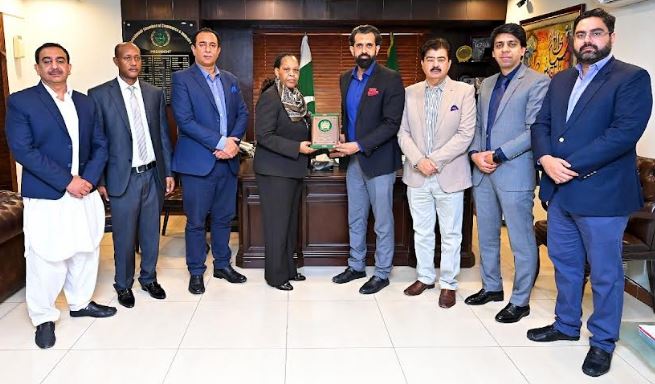 Rawalpindi: Kenya is a gateway for Pakistani investors to enter the big market of 38 African states, which are landlocked to Kenya that has the international seaport of Mombasa. Kenya will fully support Pakistani investors in exploring potential areas of investment and trade in various areas including Tourism, Agriculture, IT, Mining and Machinery.

Kenyan High Commissioner, Mary Nyambura Kamau expressed these views during her visit to the Rawalpindi Chamber of Commerce and Industry (RCCI) here on Wednesday. Boru Diba Roba, Commercial Attache, was also accompanying her during the visit.

She advised the business and industrial community of Rawalpindi to focus on diversifying their exports to Kenya in order to improve the existing trade volume between the two countries. She said that rice and tea were two main commodities which were traditionally being traded between the two countries but there were many other Pakistani products which can not only be introduced in the Kenyan market but also to many other African nations via Kenya.

Earlier, Nadeem Rauf, President RCCI gave a short briefing on the chamber’s current activities and future programs. The President of the Chamber told the High Commissioner that under the Look Africa Policy, African countries, especially Kenya, are considered important countries for the promotion of trade. In this regard, the Rawalpindi Chamber has organized the Business Africa Forum.

The Chamber will take a trade delegation to Kenya and explore the possibility of holding a Business Opportunities Conference there, he added. He demanded that direct flights should be launched between the two countries. There is a need to increase cooperation in non-traditional sectors especially pharma, IT, education, food machinery, handicrafts and sports goods, he said.

« Pursuing Doha agreement must for bringing peace to Afghanistan (Previous News)
(Next News) INS VIKRANT: Too little, Too late »