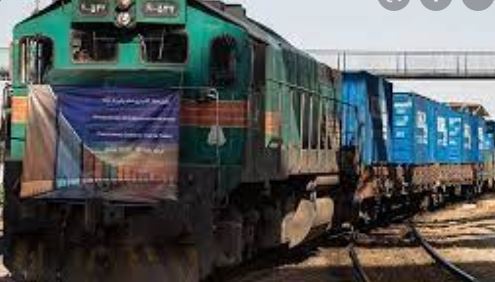 TEHRAN, JUN 20 (DNA) — With the presence of the presidents of Iran and Kazakhstan, Kazakhstan’s transit rail road to Turkey via Iran was inaugurated, and the first freighter train left Tehran for Turkey to mark the start of using Iran for transiting Kazakh goods to Europe.

During an inauguration ceremony here in Tehran, President Raisi said that one of the priorities for the Iranian government is to play an effective role in increasing regional integration by expanding trade through Iranian lands as a secure route, reasonably priced, and quick.

Raisi added highlighted that using the capacity of Iran’s North-South and East-West corridor to develop relations with Asian and European states plus removing barriers to rail transit as quickly as possible is one of the government’s priorities.

The official welcoming ceremony of Kazakhstan President Kassym-Jomart Tokayev has been held at Sadabad Palace in Tehran, where the Iranian President Ebrahim Raisi received his Kazakh counterpart.

The Kazakh president, heading a high-ranking delegation, visits Iran at the official invitation from his Iranian counterpart following his presence at the 25th St. Petersburg International Economic Forum in Russia.

Kassym-Jomart Tokayev is the second president of Kazakhstan after 30 years of the presidency of Nursultan Nazarbayev. The Iranian president and his Kazakh counterpart held talks on the sidelines of the Shanghai Cooperation Organization (SCO) in Dushanbe, the capital of Tajikistan, last year.

The two presidents agreed upon the expansion of mutual coordination and collaboration in different fields, including the railroad. Therefore, the first Kazakhstan-Turkmenistan-Iran-Turkey rail transit train arrived at Tehran Railway Station on Saturday. =DNA