Kashmir is in a state of war, experts 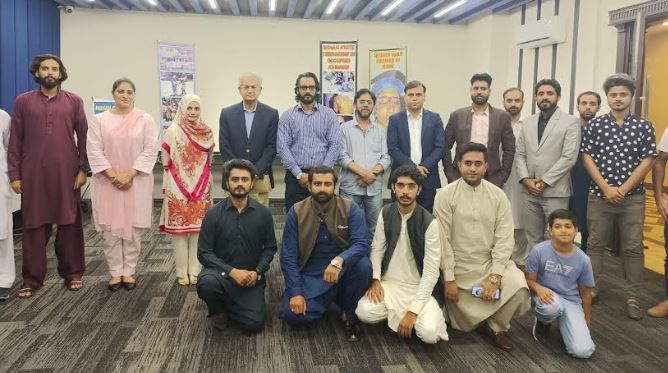 Advocate Nasir Qadri, Executive director LFK,while delivering the opening remarks said that Kashmir is in a state of war, and the August 5, 2019 actions taken by India shall not be misconstrued as the initiation of Kashmir’s annexation or occupation. Rather, Jammu and Kashmir has been under Indian occupation since 1947, and the revocation of Jammu Kashmir’s semi-autonomous status has led to the initiation of India’s settler colonial program in the occupied territory.

Dr Arshad Ali, DG India Study Centre, ISSI, while addressing the panel said the need of the hour is to stay vigilant about Narendra Modi’s Hindutva agenda in Kashmir. He further asserted that the tactics like farcical delimitation and demographic engineering are being employed by BJP government in the occupied territory. Dr Ali accentuated that India’s August 5, 2019 decisions are not just an assault on Kashmir, but rather an assault on the UNSC resolutions pertaining to Jammu Kashmir. He added that the geopolitical stance of global powers is also an impediment to the early resolution of Kashmir dispute, and hence alternative options must be sought to break the stalemate and to resolve the longstanding issue of Kashmir.

Ms. FarzanaYaqoob, former Minister AJK, said that the focus should be on what should be done, and what can practically be done. While highlighting the highhandedness and tyranny encountered by Kashmiris at the hands of Indian Occupying Forces (IOF), she said that people in occupied Kashmir are being forced to leave their homeland or are threatened and pressurized so as to break their grit and will to keep on the freedom struggle. She further added that the Kashmiris have legitimate rights to take up arms against the colonizer as a means of self-defense to safeguard their land, property, and rights.

Lt Gen Farooq Ramay emphasized that theoccupied territories are freed through force, and freedom is snatched and not begged for. He condemned the demographic changes being employed by the occupying forces in IOJK. He also urged the Pakistani government and diplomatic missions to raise a hue and cry to apprise the world of the consequences for Kashmiris in the aftermath of the abrogation of articles 370 and 35A. He further advocated that Kashmiris should unanimously fight the colonizer with synergy and collective efforts to get rid of the occupation.

Ms. Sabah Aslam, Executive Director of IICR, while speaking to the panel said that the Kashmir issue seems to be on the back burner. The collective efforts from the Government of Pakistan and the Pakistani people are the need of the hour. Each Pakistani is an advocate of the suffering Kashmiri brethren. She further highlighted the need for sensitization of the Pakistani academia and educational institutions about the systematic violence being committed by India against Kashmiris. She also recommended that an organized Pakistan-backed armed movement is necessary to impede the momentum of the demographic changes being enacted in IOJK by India with all its machinations.

Mr. Mukhtar Ahmad Baba, Spokesperson MasaratAlam Bhat, apprised the panel of the post-August 2019 situation in the occupied territory. He expounded how the Modi-led BJP government along with the 900,000 occupying forces, and more than two dozen law enforcement agencies have waged an all-out extermination operation against the indigenous Kashmiri populace. Himself having been an active member of the armed resistance against IOF, Mr. Baba further said that an organized armed struggle isideal for the Kashmiris to get rid of the non-Kashmiri settlers who have been settled in Kashmir after providing them citizenship rights under the newly passed reorganization act Jammu Kashmir 2019.