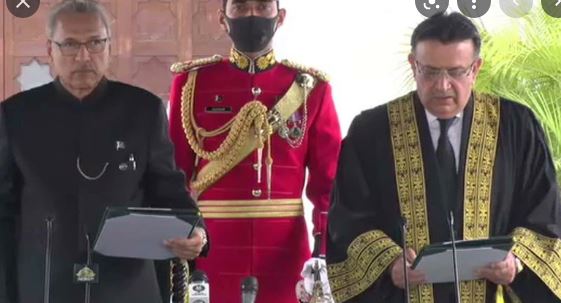 Cabinet members, parliamentarians, senior military officials and a large number of serving and retired judges of the Supreme Court were present. The notification of the appointment of Justice Umar Bandial was read out on the occasion.

“In exercise of the powers conferred by Article 175(3) read with Article 177 of the Constitution, the president of the Islamic Republic of Pakistan is pleased to appoint Mr Justice Umar Ata Bandial, the most senior judge of the Supreme Court, as chief justice of Pakistan with effect [from] Feb 2, 2022,” the notification said. Justice Bandial took oath as the country’s 28th top judge after the retirement of CJP Gulzar Ahmed on February 1. =DNA