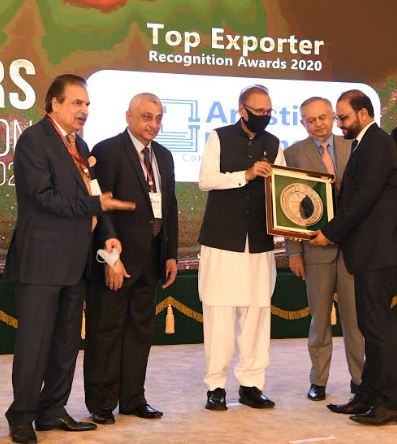 ISLAMABAD, JUN 30 – President Islamic Republic of Pakistan Dr. Arif Alvi was the Chief Guest at EFP Exporters Recognition Awards 2020 ceremony held at Presidency on 28th June, 2021. The President strongly endorsed that country’s journey towards prosperity continued in spite the COVID-19 pandemic.  Exporters have played a pivotal role in economic growth and earning foreign exchange, the President said. Pakistan’s smart lockdown strategy successfully combated CORONA Virus and, by the grace of Almighty, we became among Nations which were least affected by the pandemic.

Dr. ArifAlvisaid that there is a great potential in trade and tourism in the country. We need to further enhance our exports to create a trade balance. The Employers Federation can play the pivotal role in this regard, he said. Poverty alleviation, hospitality and tourism can be developed as a main stream industry. GilgitBaltistan attracted 15 lac tourists the previous year in spite CORONA Virus, the President apprised.

The President of Islamic Republic of Pakistan stressed the need of poverty alleviation and asked the private sector to come forward and address this major issue. “Look Africa” policy will help a lot, the President said. Promotion of women entrepreneurship can be instrumental in this regard, he said. The private sector is encouraged to participate in women empowerment initiatives, the honorable President added.

In his concluding remarks, Dr. ArifAlvi pointed out that there was a great potential of bilateral trade with central Asian countries, especially Uzbekistan and Tajikistan. He urged the exporter to explore new markets and enhance product range. Amazon is in Pakistan now and the business community can make full use of it, the president exclaimed.

Abdul RazzaqDawood, Advisor to Prime Minister for Commerce, Textile and Investment, who was the Guest of Honor at the occasion, said that tariff rationalization has resulted in increase in exports. He advised the exporters to enhance product range for local as well as the global markets. Import duties on raw material were rationalized and in some cases brought to zero, he said.

Mr. RazzaqDawood said that Industry is the main source of exports. Textile industry takes the lead in this regard along with rice and others. Information Technology (IT) has a great export potential and need to be explored further, the Mr. RazzaqDaud said. Industry is the backbone for employment of people and enhancement of exports. Pakistan can achieve its goals in this regard by skilling people and providing good quality products and services for local market as well as exports.

The Advisor for Commerce apprised that rationalizing tariffs has ensured ease of doing business in the country. He apprised that many of Industrial Raw Materials are being imported on zero-rated basis. Diversification in both, product range and geographic perspective are needed. The Government is there to support any initiative from business community, he added.

Mr. Ismail Suttar, President Employer’s Federation of Pakistan, in his welcome address said that the Federation is representing all employers across the country and functional since 1950. He apprised that the EFP Export Recognition Awards were given purely on merit. The top most exporters of the country were rightly honored by the President Islamic Republic of Pakistan in recognition to their commendable services for the country.

The President Employer’s Federation informed that the federation has provided the Economic Vision 2030 with short and long term goals and objectives accordingly. Different Committees are working on different issues under the umbrella of Employer Federation. Committees on GSP, Hospitality & Tourism, raw material processing and fishery are worth mentioning, he said. Fishery sector has great potential for export, president EFP apprised and said that extensive planning has been done to promote this sector.

MianAkramFarid,Provincial Chief EFP Islamabad urged the need of establishing new industrial zones in Islamabad. He was informally talking to the Advisor to Prime Minister for Commerce and Investment.M. AkramFarid, Provincial Chief, EFP Islamabad and Northern Area, said that the government should work with the private sector and industry – the business community has an important role in tax revenue – the government should make laws to facilitate them.

And try to create a tax system that builds new confidence in taxpayers and helps boost investment. In the current budget, the industry in FATA and the PATA region will be given sales tax, customs duty, federal. Excise duty has been waived which will severely affect the entire steel industry of the country, the difference will be about 25000 tons in steel and the ghee industry has been given similar relief. The rest of the country’s industry will not be competitive – which has made it difficult to survey the rest of the country’s industry – the government should give relief to the rest of the industry to survive and sales tax input is allowed 90% to 100 The government should abolish all duties and taxes on the import of industrial machinery and plants so that the industrial sector can upgrade itself by importing modern machinery and plants.

The process of industrial development in the country will accelerate and value-added products will be produced. He said that there is a need to develop skilled manpower as per the demand of the market so that people can get employment in the context of C-Pack. He further said that training of youth should be done. For this, the government can use modern lab facilities at the cost of industries like pharmaceuticals, flour mills, steel oil and ghee and others. More than 70 million of us are employed in other countries, most of them young people taking short-term courses in technical education and serving abroad, certainly countries that have vocational education as part of their general education. Has made its motto and its economic growth rate is high.

By equipping young people with skills, an annual income of 24 24 billion could be increased to 40 40 billion in two years. Furthermore, he said, the industry has played a key role in creating jobs, with students benefiting from the use of industrial labs and other equipment. We lag far behind other countries in manufacturing products and are spending heavily on foreign exchange imports. We need to harness the potential of our youth for the production and development of goods so that they can steer the technical and productive sectors in the right direction and move the country forward.