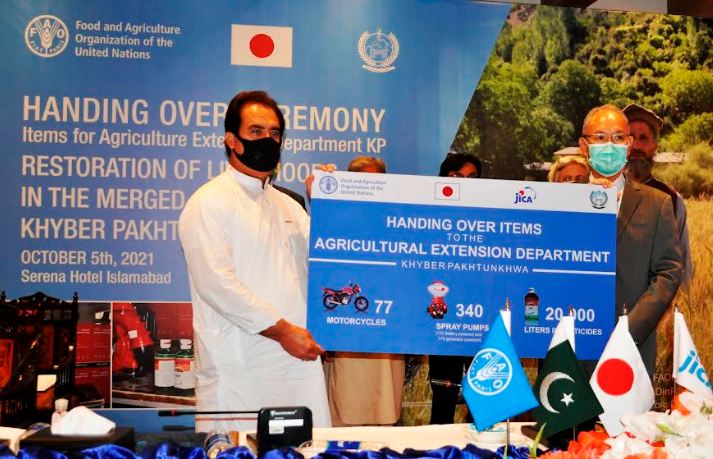 ISLAMABAD, OCT 5 /DNA/ – The Government of Japan in collaboration with the Food and Agriculture Organization (FAO) of the United Nations handed over locust control items to the Government of Khyber Pakhtunkhwa, in a ceremony organized in Islamabad, under the Grant in Aid project titled “Project for the Restoration of Livelihoods in the Merged Districts of Khyber Pakhtunkhwa”.

The items handed over during the ceremony included 20,000 liters of insecticide, 170 battery-operated sprays pumps, 170 generator-operated spray pumps and 77 units of motorcycles for mobilization of staff of the Agriculture Extension Department for future locust control activities in the merged districts of Khyber Pakhtunkhwa. The support will strengthen the operational capacities for desert locust control operations through better preparedness and response to the crisis.

The aforesaid project, which provided grants worth 560 million Japanese Yen (Equivalent to around USD 5.1 million / around PKR 840 million), started in April 2018 and will be completed within 2021. The Project has been implemented in order to restore livelihoods in the Merged Districts of KP by improving productivity and value addition in the Agriculture Sector. Under the project, activities like establishment of fruit nurseries, rehabilitation of irrigation channels, and distribution of poultry packages have taken place and benefitted more than 32,000 households (around 295,000 individuals). The provision of the locust control equipment was added so that the KP Government can effectively tackle with locust attacks in future.

At the handing over, Ambassador MATSUDA stated, “Japan supported Pakistan to control locust outbreak by supplying 60 thousand litters of insecticide and material needed, along with financial support to farmers last year. Moreover, we are providing additional material to the Government of Khyber Pakhtunkhwa because we believe that initial response is essential for locust control in the near future. I hope people in this region will continue stable farming and our cooperation will contribute to their prosperity”.

Ms. Florence Marie Rolle, FAO Representative stated that the support from the people of Japan was instrumental in the restoration of livelihoods in the Newly Merged Districts (NMDs) of Khyber Pakhtunkhwa and augmenting the capacity of Agriculture Department to cope with future disasters more effectively. She further added that our collaboration with the Embassy of Japan and JICA will further be strengthened in the days ahead for the provision of better services to the crisis hit people in the NMDs and elsewhere in the country.

Mr. FURUTA Shigeki while speaking at the ceremony said that the two phases of projects, funded by Government of Japan ensured food security through sustainable agriculture development that resumed agriculture-based livelihoods of the people who returned after internal displacement. He hoped that the JICA support would make a significant contribution for strengthening capacity of Agriculture Extension Department in combating future locust attack in the targeted areas to minimize crops damages of poor farm families.

Mr. Mohibullah Khan, Minister for Agriculture, KP expressed his appreciation on behalf of the Government of KP. He thanked the Government of Japan and JICA for their extended support through the FAO implemented project for the restoration of livelihoods in the Merged Districts of KP. He further said that this support came at a very critical juncture and much needed time, which had not only revitalized livelihoods of the local people but ensured their food security as well.