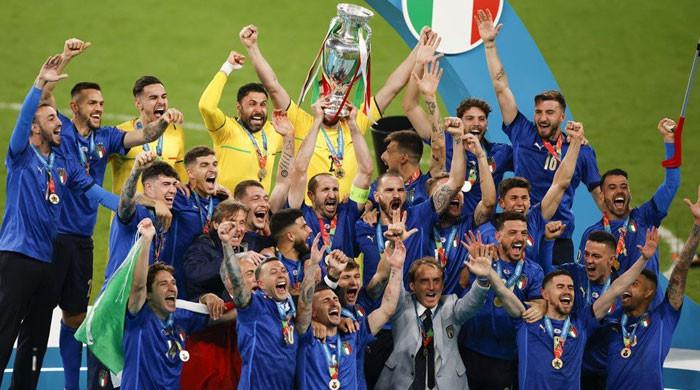 Italy wrecked England’s Euro 2020 party at Wembley on Sunday, winning a tense final on penalties to plunge the host nation into despair and prolong their 55-year wait for a second major title.

Roberto Mancini’s men recovered from the shock of conceding the quickest goal ever in a European Championship final to equalise and held their nerve to claim a 3-2 shootout victory after a 1-1 draw following extra-time.

It is the second time Italy have been crowned European champions and comes after the embarrassment of failing even to qualify for the 2018 World Cup in Russia.

Three players fluffed penalties for England, extending their poor record in shoot-outs and leaving the hosts waiting for another major trophy after the 1966 World Cup.

“We did well,” Mancini told RAI Sport. “We conceded a goal straight away and struggled, but then we dominated the game.

“The lads were wonderful, I don’t know what more to say. It’s important for all the people and all the fans. I hope they’re celebrating (in Italy).”

Italians spilled into the streets from Milan to Palermo to celebrate their side’s triumph, pushing aside thoughts of the coronavirus pandemic which has gripped the nation.

Earlier, a partisan crowd of more than 67,000 mostly England fans at Wembley was whipped into a state of fever pitch by rousing renditions of “Three Lions” and “Sweet Caroline” before kick-off.

Gareth Southgate’s team raced out of the blocks and were ahead in just the second minute when defender Luke Shaw finished coolly at the back post after an inviting cross from Kieran Trippier.

Italy grew stronger as the match went on and equalised with 23 minutes remaining when Leonardo Bonucci scrambled the ball into the net from close range.

With four minutes remaining of normal time a pitch invader stopped the action and stewards struggled to catch him, adding to a sense of chaos at the stadium after ticket-less fans earlier forced their way in.

Normal time finished goalless despite a flurry of substitutions and the sides were still locked at 1-1 after extra time.

Bukayo Saka, sparking scenes of delirium from the players and the small pocket of italian fans.

The atmosphere around Wembley was frenzied in the build-up to the match, which kicked off at 1900 GMT, with supporters draped in England colours downing pints of beer and chanting anthems.

Footage posted on social media showed hundreds of supporters battling to get past lines of stewards and police, with some able to force their way through security cordons and others scaling walls.

Another video appeared to show violent clashes between fans inside Wembley itself.

On another sour note, police said they would be investigating “offensive and racist” social media posts directed at Rashford, Sancho and Saka, who all failed from the spot.

A Football Association spokesman said: “The FA strongly condemns all forms of discrimination and is appalled by the online racism that has been aimed at some of our England players on social media.”

Italy had been arguably the team of the tournament heading into the final, sweeping through the group stage with a perfect record before knocking out Austria, top-ranked Belgium and Spain to reach the final.

Revitalised since Mancini took over after their failure to qualify for the 2018 World Cup, the Azzurri are now unbeaten in 34 matches.

The four-time world champions’ lone previous European Championship triumph came in 1968. They were beaten finalists in 2000 and 2012.

England fans will have to come to terms with a painful defeat just when it seemed they were on the brink of ending their tournament drought, stretching all the way back to the 1966 World Cup, which they won on home soil.

Southgate has revolutionised the national side since taking charge in 2016, leading his team to the semi-finals of the World Cup in Russian three years ago.

The manager, who missed a penalty in the Euro 96 semi-final against Germany, urged England to use the pain to fuel success in the future, accepting the blame for the heartbreaking penalty shoot-out defeat.

“I said we could have no recriminations,” he said. We win and lose together. They’ve got to walk away from here with their heads held high.

“They’ve done more than any other team in the last 50 or so years. In terms of the players, they should be incredibly proud of what they’ve done.”