Israel’s Benjamin Netanyahu in a state of fear: Qureshi 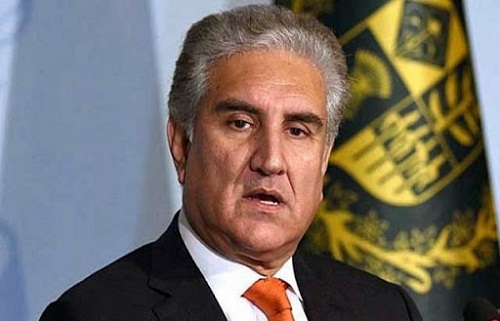 The foreign minister’s statement came after the UN Human Rights Council (UNHRC) decided Thursday to initiate an open-ended international investigation into violations surrounding the latest Gaza violence, and into “systematic” abuses in the Palestinian territories.

The resolution, which passed with 24 of the council´s 47 members in favour, will spur an unprecedented level of scrutiny on abuses and their “root causes” in the decades-long Middle East conflict.

The text, which was presented by Pakistan on behalf of the Organization of Islamic Cooperation, was debated during a special one-day council session focused on the surge in deadly violence this month.

FM Qureshi said that the OIC has achieved success in the meeting of the Human Rights Council yesterday, adding that if Israel has announced that it will not cooperate in the investigation, they are being exposed.

“From Netanyahu’s statement, it seems that they are in a state of fear.”

Opening the session on Thursday, UN rights chief Michelle Bachelet voiced particular concern about the “high level of civilian fatalities and injuries” from the attacks on Gaza, and warned the Israeli attacks on the enclave “may constitute war crimes”.

The Palestinian foreign ministry saluted the move and said it “reflects the determination of the international community to move forward in the path of accountability, law enforcement, and protection of Palestinian human rights.”

But Israeli PM Benjamin Netanyahu slammed it as “shameful.”

“Today’s shameful decision is yet another example of the UN Human Rights Council’s blatant anti-Israel obsession,” Netanyahu said in a statement.

Qureshi urged the UN body to ensure the realisation of the fundamental rights of Palestinians and “hold the aggressor accountable through international inquiry”.

In his virtual address to the Special Session of the UNHRC on the ‘Grave Human Rights Situation in the Occupied Palestinian Territory including East Jerusalem’, the foreign minister said the two-week aggression ignited violence and communal attacks against Palestinians, thus calling into question the tall claims of democracy and rule of law.

Emphasizing on ensuring Palestinians’ rights to life and self-determination, Qureshi said “condoning to violations only breeds arrogance and impunity”.

The foreign minister said Pakistan supported the UNHRC’s deliberations and decisions in accordance with the merits of the human rights situation in Palestine and also urged upon the others to do likewise.

As the apex UN body, he said, the UNHRC was mandated to guard human rights and human dignity and mentioned that today’s Special Session, requisitioned by 70 countries, was an exercise of this important mandate.

Qureshi said the people of Palestine had, once again, faced a relentless onslaught on their rights and dignity, in two weeks of brutal Israeli aggression.

He stressed that the violent repression compounded several aspects of the perpetual Palestinian tragedy in seven decades of illegal occupation.

In this regard, he mentioned the continuous killings of civilians and disproportionately affecting the vulnerable including women and children.

He pointed that continuing Israeli settlement activity was acting as a “driver and force multiplier of occupation and violence”.

Qureshi said the violence led to indiscriminate demolition of houses, hospitals, and schools causing innumerable hardships to the people. Also, the situation resulted in recurring forced displacements, making people refugees in their own land.

“False equivalence between the victim and the aggressor, on account of political expediency, is patently incorrect and morally reprehensible,” he said, adding that “This Council must act to rectify the wrong.”