Islamabad seeking a broad-based relationship with US: Masood 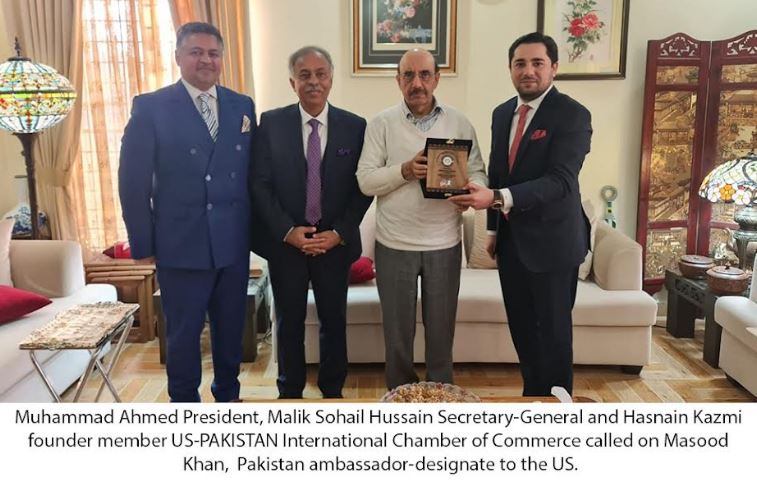 ISLAMABAD /DNA/ – Masood Khan, Pakistan’s ambassador-designate to the United States had  said Pakistan wants to enhance economic, investment and trade  ties with the United States and that he will try his best to push the bilateral relations  to new heights.

He said Pakistan would build better mutual bilateral relationships between the two countries for which every option will be explored and the business community of both the countries will be taken on board for the purpose.

He said that business delegations from Pakistan to the US and from the US to Pakistan will be encouraged to boost bilateral trade,  investment and joint ventures.

The ambassador-designate said that Pakistan desires broad-based and multidimensional relations with the US and therefore the business community should utilise their best abilities towards further enhancement of Pakistan-US relations.

The United States is Pakistan’s top export destination and a strategic partner, and both countries know the value of relationships across a number of fronts, Khan added.

On the occasion, leaders of USPICC Muhammad Ahmed, Malik Sohail and Hasnain Kazmi appreciated the services of Masood Khan as Permanent Representative of Pakistan to the United Nations, Pakistan’s Ambassador to China, and President of Azad Kashmir and said that his efforts had exponentially pushed Pakistan’s exports to China.

They said that the Chairman of USPICC Siddique Sheikh and President Sajjad qamar are very well-connected with Senators, representatives and big business houses. They are waiting for his arrival in the US so that he can assist him in cementing bilateral economic ties to advance the shared agenda and common goals of prosperity.

The USPICC officials informed that a delegation of Pakistan entrepreneurs from various sectors will soon visit the US to explore trade and investment opportunities on which Masood Khan assured all-out cooperation.