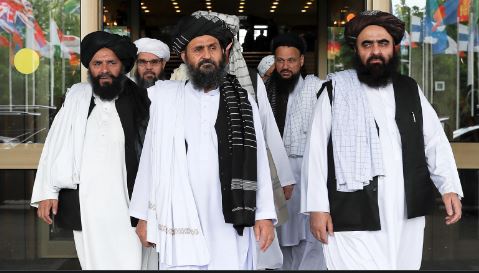 The growing deadly violent acts, mostly focused on minority Shiat Muslims in all over Afghanistan are not only exposing incompetency and failure of Taliban but it further fuelling anger amongst Afghans against neighbouring Pakistan. Growing anger amongst the Afghans likely to force Taliban leadership for re-visiting its relations with Pakistan but the powerful Haqqanis through one or the other ways are making its best to help Pakistan’s spy masters of strengthening its presence and influence throughout Afghanistan.

In recent days, deadly terror acts occurred in Kabul, Mazar-i-Sharif, Kundoz and several other areas. Compare in recent past, the recently commenced or commencing violent is not only focused against the Shia people but also against Southern and Western areas of Afghanistan. The Islamic States (IS) commonly known as Daaesh is claiming responsibility for these acts. Though Pakistani authorities are denying its links and support but common Afghans believe that like of Haqqanis, the IS is also helped, sponsored and financed by Pakistan. Almost top leaders and commanders of IS belong to Pakistan, who were earlier associated with banned Tehrik Taliban Pakistan but switched over to IS after military operation Zarb-i-Azab against militants in North Waziristan on June 15, 2014 last. This military operation is considered a very big shift in Pakistan’s terror based planes as it become a pioneering point in destablisation of situation across the border in Afghanistan.

Prior to fall of Kabul to Taliban and departure of President Ghani government, majority of the IS militants shifted and scattered to Northern Afghanistan. No other than the US troops had prompted the Afghan government of launching joint operations against the IS militants in Eastern provinces of Nangarhar, Kunar and Laghman provinces. As a result, over three thousands mostly women and children were arrested whereas the foreigners from different Central Asian Republics forced to flee towards Southern Afghanistan. The presence of these CAR and IS militants is also considered a serious threat to the future of neighbouring Central Asian Republics. There are reports of tense situation on Afghanistan Tajikistan border due to regrouping of militants on one and CAR troops on the other sides.

Contrary to claims on the part of Taliban, still resistance is in progress in various parts of Northern Afghanistan. Couple of days, Taliban claimed killing Sohal Azmaray ( nephew of Ata Muhammad Noor) along with two others in an encounter which was continued for several hours in Mazar-i-Sharif. Likewise, there is presence of Northern Alliance supporters in all over Panjsher valley who from time to time, attacking Taliban. Likewise is the situation in other provinces like Jauzjan, Badghis and Faryab whereas warlord Rashid Dostam is considered very strong and popular.

Amidst increasing violent and terror acts, resistance against Taliban and unrest amongst common Afghans, there are reports regarding divisioning of Afghanistan on ethnic grounds. Compare to Northern and Western Afghanistan, comparatively situation is calm in Eastern and Southern Afghanistan whereas Qandahari and Haqqani Taliban have established their influence very well.  However, almost Pushtoons from these areas are unhappy with Taliban’s continue dependence in Pakistan. The non Pushtoons Afghans like Shia Hazara’s, Uzbeks, Turkmens and Tajiks wouldn’t remain silent for long time. They likely to review their broad based alliance against Taliban in near future. Almost top leaders like Rashid Dostam, Karim Khalili, Ustad Mohaqiq, Younas Qanooni, Salah Ud Din Rabbani, Rashid Dostam and others are abroad in Turkey, Tajikistan and United Arab Emirates. All of them in close links with each other’s and are in possession of financial resources-which is essential for logistic needs in launching of a resistance movement against Taliban.

The only main hurdle before the non-Pushtoon Afghans in commencing of armed resistance against Taliban is the links and association between Pakistan and US led allies. Besides, US, Pakistan is also in close links with United Kingdom and Saudi Kingdom on the issue of Afghanistan. And without entering into understanding and coordination with the Western world based high profiled Pushtoon Afghans, it could be hard for scattered non-Pushtoons to get the goals. Certain circles like former National Security Advisor and First Vice President Amar Ullah Saleh is making his best to go for reunification of all Afghans against Taliban. But it will take some time and now patience on the part of Afghans is going to end, therefore, growing acts of deadly terror acts is considered very harmful to t he very future of Afghanistan and its people.