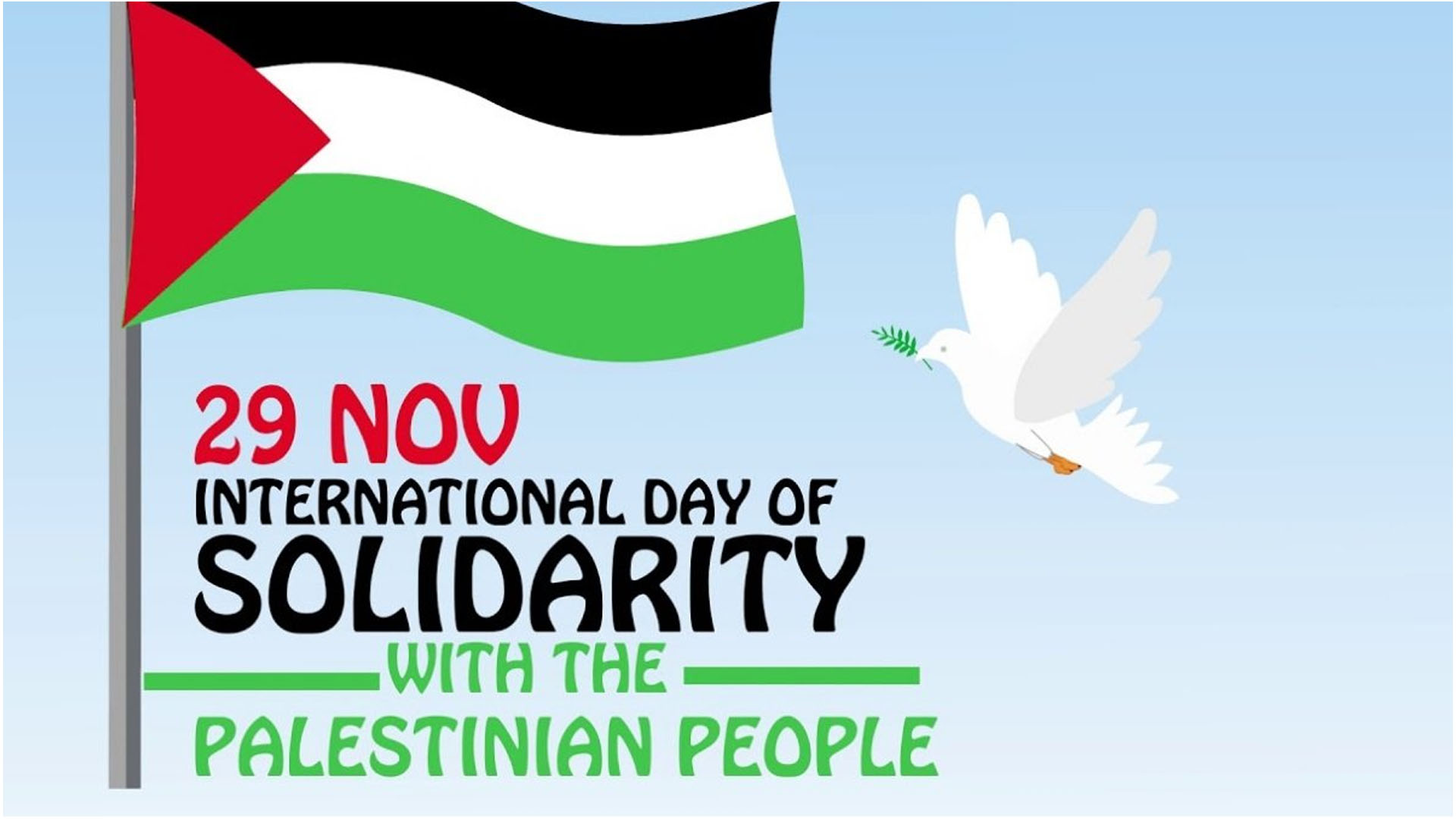 ISLAMABAD, NOV 28 /DNA/ – On the twenty-ninth of November every year, the free people of the world celebrate the International Day of Solidarity with the Palestinian People, which was declared by the United Nations General Assembly in 1977, solidarity with the inalienable rights of the Palestinian people to freedom and self-determination, and to establish their independent state on their national soil, with Jerusalem as its capital.  This day reflects the adherence of the vast majority of countries in the world to the values ​​of international justice and the need to achieve security and peace in the region.

Justice requires that the Palestinian people be empowered to determine their own destiny like other peoples , and to enable them to attain their national aspirations and goals in building a free, sovereign and viable state and to end the Israeli military occupation and the settlements as well  , especially in the city of Jerusalem, which is witnessing the fiercest settlement building aimed at uprooting the Palestinian existence from the holy city.  On the International Day of Solidarity with the Palestinian People, our people are still under direct Israeli occupation and are subjected to an abominable racial discrimination regime, in which our people suffer from repeated violations of the Israeli occupation forces and the settler flocks who target the Palestinian  people , their land , sky , air , capabilities and natural wealth .  On the International Day of Solidarity with the Palestinian People , two – third of which are still suffering from a refugee status since 1948 , they live in camps in the right countries clinging to the return to their villages and cities from which they were forced  out, and are still awaiting the implementation of United Nations resolutions, especially Resolution 194, which stipulated their return to their homes.

The resolution has emphasized to compensate Palestinian refugees as well.  Despite everything , the Palestinian people are still clinging to their national identity and resisting Israeli plots to eliminate our culture and heritage.  Palestinians have been living in the land of Palestine for thousands of years while struggling to maintain their identity and integrity guaranteed first by their massive sacrifices in the course .  The modern history of Palestine, which has been represented by hundreds of thousands of martyrs, wounded and prisoners, as well as the UN resolutions in its various organizations and branches have also guaranteed them, and also included the obligations that the occupying power tries to evade  from by establishing alternative paths and by disavowing their commitments and by practicing the most severe violations against the Palestinian people .

A just solution to the Palestinian issue requires an end to the new apartheid regime imposed by the Israeli occupation force and an end to its occupation of the Palestinian land that has continued since June 5, 1967, including Jerusalem , which is also a prelude to resolving  all crises in the region , and an entry point for the Palestinian people to restore their pioneering civilization role in building The values ​​of the humanitarian system that the peoples of the world seek , on their land and in their independent and sovereign state on the 1967 borders  with East Jerusalem as its capital .  On behalf of the State of Palestine and the Palestinian people , the Embassy of the State of Palestine to the Islamic Republic of Pakistan salutes the brotherly people of Pakistan for their sympathy and support , appreciates the solidarity statements of the honorable President , Government , pakistan army, Parliament and  all Political Parties The Embassy highly evaluates our historical relations with Pakistan for the last 8 decades , we are proud of Pakistan’s friendship and we feel stronger with it’s support on official and public levels .

institutions and bodies that express on a daily basis their solidarity with the Palestinian people and their rights.  The Palestinian embassy in Pakistan appreciates the historical Pakistani fraternal stances in supporting the Palestinian people to obtain their rights .  We also extend our appreciation to the friends of Palestine around the world for their support and solidarity on the Day of the International Day of Solidarity with the Palestinian People and in their expression of their adherence to the values ​​of justice and freedom.  Long live Palestine , long live Pakistan , long live countries and peoples that love freedom peace and justice .