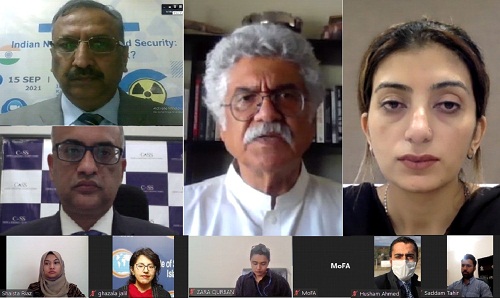 Islamabad; 17 Sep 2021 – The speakers in a webinar on “Indian Nuclear Safety and Security: A reality Check?” have noted that Indian nuclear program has been unsafe with many incidents of leakage and material theft. Now it is posing more integrated threat with RSS Ideology that does not accept diversity of religions and beliefs. Both factors can prove destructive for the peace in the region and the world. The Webinar was held by Pakistan House, Islamabad based think tank. The speakers included Ambassador Zamir Akram, Former Permanent Representative to the United Nation’s and International Organizations in Geneva, Mr. Syed Muhammad Ali, Director Nuclear and Strategic Affairs at CASS, Muhammad Athar Javed DG Pakistan House and Ms. Sitara Noor, Senior Research Associate at CASS and South Asian Voices Visiting Fellows 2019-2020.

Amb. Zamir Akram stated that Indian nuclear safety regime is very weak, and several cases have been reported by Indian and international media. The threat of stolen radiological material from Indian facilities would fall in the hands of Non-State Actors is real, and recommended that International organizations including IAEA should take necessary actions to such incidents to re-occur.

Mr. Syed Muhammad Ali said that the Californium is not a naturally occurring radioactive material like Uranium and it is produced in nuclear reactors which proves that not only Indian nuclear mines have poor safety and security standards but also the Indian nuclear reactors. Therefore, he urged the international community to review its nuclear cooperation with India and support for New Delhi’s Nuclear Suppliers Group membership case, in view of Indian irresponsible nuclear behavior.

Ms. Sitara Noor highlighted the importance of an independent regulatory body, and said that since India’s regulatory authority is not independent, thus lacks international security and safety standards. She emphasized that international regulatory bodies must take note of India’s irregular practices concerning radioactive material. An impartial commission should be formed to investigate the episodes of missing and stoles radioactive material from Indian nuclear facilities (which is happening since 1974), she concluded.