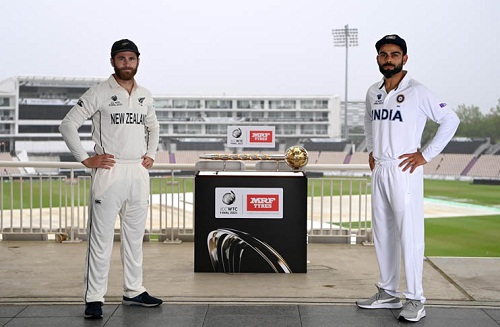 The ICC World Test Championship (WTC) Final between India and New Zealand will be the first of its kind in the game of cricket.

This effort by world’s governing body was to make Test cricket more interesting and relevant where teams played at home and away conditions.

Talking about the teams, both have been the best Test sides for quite some time and deserve their place in the final. The accolades are towards New Zealand but India can put great effort after what we saw their courage during the Australia tour.

The kiwis are coming into this game with advantage as they played two-Test match series against England prior to the final while India arrived two weeks back with little practice and straight out of quarantine.

Virat Kohli-led India qualified for ‘The Ultimate Test’ after finishing first on the standings but their spot in the decider was not secured until their very last match against England.

India were on their merry way to reach the final in terms of points earned but after the change in method due to the COVID-19 pandemic, India had their work cut out. The percentage of points secured was brought after the world went to a standstill.

India started their campaign with straight series wins against West Indies, South Africa and Bangladesh. They were dealt with hard time in New Zealand where they suffered a 2-0 defeat.

They traveled to Australia and were bundled out for a shameful 36 in the second innings of the Adelaide Test and lost the match by eight wickets but they restored their hopes by winning second and fourth Test, claiming back to back series win in Australia.

The misery continued after they tasted defeat in the opening Test against England but they were able to trap England in final three Tests with spin and took the series 3-1, securing top spot on the WTC standings.

New Zealand may call as luckiest to reach here after they didn’t play one away series due to pandemic but their performance at home, helped them to reach here.

They levelled the series in Sri Lanka 1-1 and lost to Australia 3-0. They bagged series wins against India, West Indies and Pakistan to lift themselves to second spot.

These type of encounters provide key battles up for the grabs and individual match-ups can potentially make the difference.

The top two giants of world cricket will be leading their sides respectively and can play a pivotal role in their teams. The match will be a testimony of their class as they are called as ‘batters of this generation’ and being among the top five in current batsmen rankings, the fans will be at the edge of their seat while watching these lads.

Kohli’s deputy Ajinkya Rahane has been India’s highest run-scorer and Tim Southee is New Zealand’s greatest wicket-taker. They have played vital roles for their teams in the road there and will have plenty to offer. Southee has taken 51 wickets at 20.66 in the WTC, with three five-wicket hauls along the way, while Rahane has scored 1095 runs at 43.80 this WTC cycle, notching three centuries and six half-centuries across 17 matches.

Rohit Sharma bats at the top, while Neil Wagner comes to ball as replacement of first two bowlers but still the battle between them, will be one to watch out for. Rohit is a master of pull shot while Wagner’s main weapon is a short ball.

This battle at the top between these two rising stars will be a thrilling one for the cricketing world. Jasprit Bumrah is yet to dismiss Tom Latham in Test but his action becomes lethal when he comes round the wicket to the lefties and it might trouble Latham for an LBW dismissal.

The veterans of their respective sides with 100 Test matches at their back, Ross Taylor (107) and Ishant Sharma (101) will be eager to step up. Ishant has the better of Taylor as he has dismissed him four times and also holds a good record in England.

The Rose Bowl has hosted six Test matches since 2011, providing help to both pacers and spinner. According to head groundsman Simon Lee, the pitch might have ‘pace, bounce and carry’ but the weather can make the difference as the forecast doesn’t look ideal.

There is a forecast of rain throughout five days and ICC has added a sixth day to compensate for it too.

India has announced their playing XI while New Zealand will name at the time of toss.

The winner will receive the ICC Test Championship Mace, which has been traditionally held by the No.1 Test team and prize money of $1.6 million while runner-up will collect $800,000. In the result of a draw, the prize money for first and second will be split between the two sides and the Mace shared.

« Malawi opposition seeks president’s removal (Previous News)
(Next News) Final decision regarding use of EVMs in elections will be taken by ECP: Alvi »