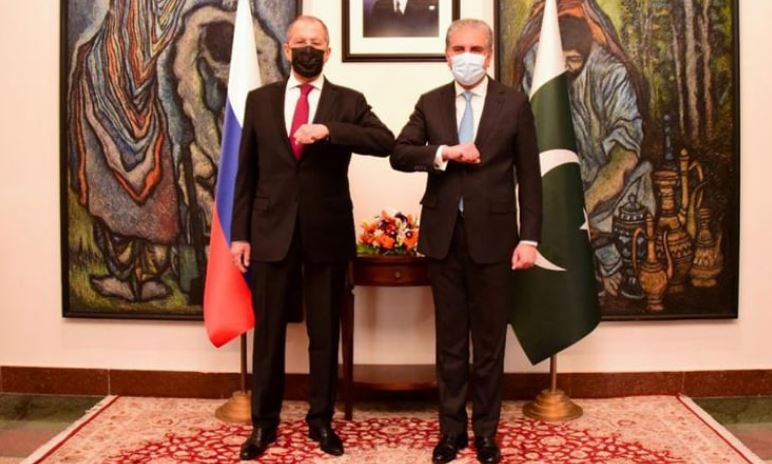 ISLAMABAD, MAR 5: Foreign Minister Shah Mahmood Qureshi held a telephone call with his Russian counterpart, Sergey Lavrov, on Saturday and stressed the need for a diplomatic solution to the ongoing Russia-Ukraine conflict, according to a statement issued by the Foreign Office (FO).

Qureshi also sought the Russian government’s assistance for the evacuation of Pakistani citizens from Ukraine, the statement said.

The telephone call takes place as tensions escalate between Moscow and Kyiv and more than a week after Russia launched a military offensive in Ukraine, inviting criticism and sanctions from the West.

Underlining Islamabad’s concerns over the situation in Ukraine, Qureshi highlighted during his conversation with Lavrov that Pakistan had been emphasising the significance of fundamental principles of the United Nations (UN) Charter to deal with the situation.

He told Lavrov that Pakistan had called for “de-escalation and underscored the need for a diplomatic solution in accordance with the relevant multilateral agreements, international law, and provisions of the UN Charter,” the FO statement said.

Qureshi further informed the Russian foreign minister about his recent phone conversations with counterparts from Ukraine, Poland, Romania and Hungary, as well as with the high representative of the European Union, in which he had shared “Pakistan’s principled position and stressed the importance of finding a solution [to the Russia-Ukraine conflict] through dialogue and diplomacy”.

He expressed the hope that talks initiated between Russia and Ukraine would “succeed in finding a diplomatic solution”.

Moreover, the FO said, he emphasised that the “safe and swift” return of Pakistani citizens from Ukraine remained the government’s topmost priority and requested Russia for help to facilitate the process.

Lavrov assured him of full support on this account, the FO statement added.

The Russian foreign minister also shared Moscow’s perspective on the situation, spoke about Kremlin’s measure to allow humanitarian corridor in Ukraine and underlined readiness for the next round of talks with the Ukrainian side, the FO said.

In a recently held UN General Assembly session, where countries voted on a resolution demanding an immediate end to Moscow’s offensive in Ukraine, Pakistan had abstained from voting but emphasised the need to protect the territorial integrity of a state without threatening the national interests of another.