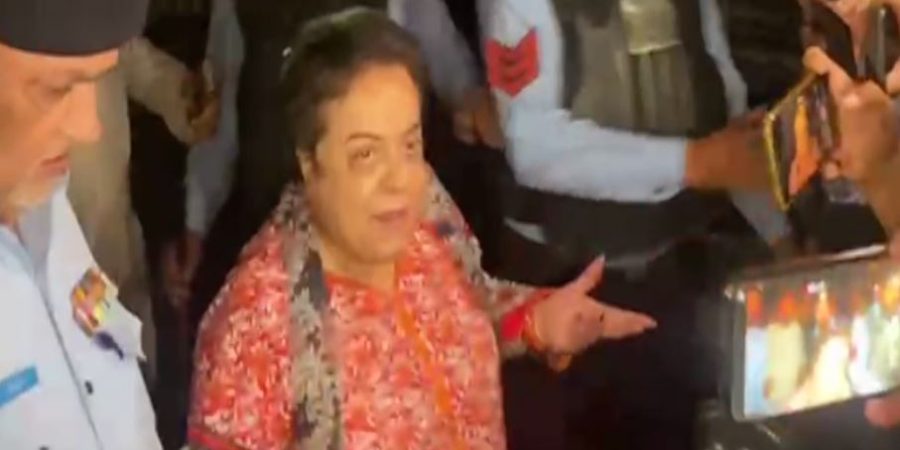 Islamabad, MAY 22: The Islamabad High Court (IHC), in late hours of Saturday, ordered the release of PTI leader Shireen Mazari and instructed the government to conduct a judicial inquiry.

The court issued the orders hours after instructing the interior secretary to produce the PTI leader at 11:30pm. Mazari was manhandled and arrested from outside her Islamabad residence earlier in the day by police officials over a land ownership and transfer case.

At the onset of the hearing, Mazari told the court: “I was stopped on the Motorway for an hour. A male doctor tried to conduct my medical examination. They did not have a female officer with them. Officers of Anti-Corruption Punjab were taking instructions on the phone. My bag was also searched without a warrant, and I have still not been given my phone back.”

“There was another person with the anti-corruption officials and he probably was with the ISI,” she added.

At this, IHC Chief Justice Athar Minallah rued that the government had not taken any action on enforced disappearances. “These incidents happen when the Constitution is not respected. Every government exhibits woeful behaviour on constitutional violations.”

Mazari told Justice Minallah that she was 70 and sick but was still subjected to torture.

The chief justice remarked: “This court will not compromise on its jurisdiction. The abduction of Matiullah Jan has not been probed till date.”

At this, the deputy attorney general replied: “We cannot work 24/7. Work on Matiullah Jan’s case is ongoing and we will conclude the investigation soon.”

The chief justice wondered how it was possible that no one knew the details of Mazari’s arrest.

He reminded newly appointed Inspector General (IG) of Islamabad police, Dr Akbar Nasir Khan that the head of the organisation was ultimately responsible. “Tell us till when can you complete the investigation [in Mazari’s case]?”

“I have taken the charge just today. This incident had happened prior my taking of charge,” the capital police chief replied.

The advocate general, meanwhile, thanked the court for opening its doors late night. “The political parties will now have to acknowledge that the court is here to ensure constitutional protection even at night.”

Mazari’s daughter requested the court to order a judicial inquiry — a request that was granted as the chief justice ordered Mazari’s release until the probe was conducted.

After the hearing, when Mazari was asked if she was targeted for her recent Twitter activity, she said: “It is possible”.

Either Sana, Shehbaz or agencies behind my arrest: Mazari

Prior to the start of the hearing, Mazari was brought to the high court by Islamabad police, whose officers flanked her as she walked into the court premises. Outside the court, she was reunited with her daughter Imaan Zainab Mazari-Hazir.

In a walking interview with reporters, when asked who was behind her arrest, Mazari said: “[It was either] PML-N’s Rana Sanaullah and Shehbaz Sharif or the intelligence agencies.”

When asked how she was treated, she said: “I will tell that in the court. They dragged me out of the car, did not show any warrant.”

When asked again that on whose order she was arrested, Mazari responded: “This we do not know yet but those who were taking me to Lahore, they said Rana Sanaullah and Shehbaz Sharif. The torture that they have done on me, I will tell it all.”

The IHC reopened late night and outside its usual working hours after Mazari’s daughter filed the petition against her mother’s arrest.

the high court said that when it has already given orders that no MNA can be arrested without the permission of the Speaker of the National Assembly, and since Mazari is still an MNA on account of not having been de-notified form her seat, then “under what authority of law the fundamental rights of Dr Shireen Mazari were violated?”.

The court said that its order should also be sent to Islamabad Advocate General Barrister Jahangir Khan Jadoon and Attorney General of Pakistan Ashtar Ausaf Ali.