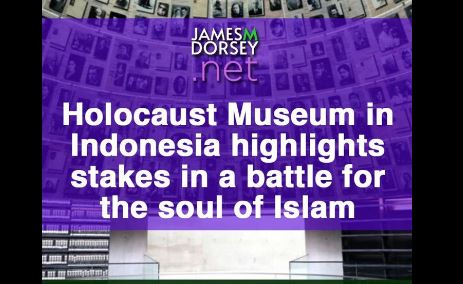 Controversy over the opening of Southeast Asia’s first Holocaust museum highlights differences in the Muslim world over the limits of religious tolerance and Muslims’ ability to debate those limits.

The controversy over the museum in Minahasa, North Sulawesi, home to one of Indonesia’s two known synagogues, comes as the United States and American Jewish groups have pressured the world’s largest Muslim-majority democracy to recognize Israel. Indonesia’s minuscule Jewish community is estimated to number about one hundred.

US and Israeli officials believe that recognition of Israel by Indonesia, or one of Asia’s other largest Muslim-majority countries, would allow Saudi Arabia, the custodian of Islam’s two holiest cities, Mecca and Medina, to follow the United Arab Emirates and Bahrain in establishing diplomatic relations with the Jewish state. The two smaller Gulf states established relations with Israel in 2020.

The controversy over the museum at the Shaar HaShamayim Synagogue also erupted as autocratic Arab countries sought to rebuild ties to their erstwhile Jewish communities in a bid to project themselves as beacons of religious moderation and tolerance.

Crackdowns on freedom of expression in countries like the UAE and Bahrain have allowed the two countries to portray an image of near-unanimous public support for their burgeoning relations with Israel.

However, the crackdowns have not stopped expressions of anti-Jewish sentiment in countries like Kuwait.

“Is this who we have become in a country whose heritage prides itself on coexistence? What a pity. What a loss for us. How heartbreaking for our forefathers, a few of whom were Jews who lived here alongside us,” said Kuwait-based poet and writer Nejoud Al-Yagout.

Ms. Al-Yagout spoke out after the US embassy in Kuwait was accosted last November on social media for wishing Jews a happy Hanukkah feast.

By contrast, the controversy in Indonesia has focused more on the condemnation of Israeli policy towards the Palestinians than on anti-Jewish sentiment. It highlighted sharp divisions among Indonesian Muslims in dealing with the Israeli-Palestinian conflict and their ability to put their differences on public display.

The controversy was fueled by the fact that the Holocaust museum became a reality because of support from Yad Vashem, Israel’s official memorial to the Jewish victims of the Nazi Holocaust. A Yad Vashem executive participated by video link in last month’s inauguration of the museum on International Holocaust Day.

Yad Vashem’s role sparked speculation that the museum was a backdoor to furthering Israeli-Indonesian relations.

“The Indonesian government should act decisively and immediately demolish the museum because it is provocative and its presence is not welcomed among many in this country,” said Muhyiddin Junaidi, deputy chairman of the advisory board of the Indonesian Ulema Council (MUI), the country’s top body of Islamic scholars.

Echoing Mr. Junaidi’s remarks, Sudarnoto Abdul Hakim, the group’s deputy chairman for foreign affairs, insisted that “Jewish communities and the descendants of Jewish people everywhere, including in Indonesia and North Sulawesi, should…see fairly, clearly the brutal acts that have been perpetrated by Israeli Zionists against the Palestinian people since 1948.”

Mr. Abdul Hakim suggested that Jewish leaders meet with the Council “to prevent things that are not desirable… I think this is a good step to resolve the issue in a persuasive way.”

Mr. Abdul Hakim’s potentially ominous remarks and Mr. Junaidi’s call for the museum’s destruction contrasted starkly with statements by Yahya Cholil Staquf, the newly elected chairman of Nahdlatul Ulama, the world’s largest civil society movement that has an estimated following of up to 90 million people.

“Holocaust remembrance serves as a memorial and vivid reminder of the cruelty, violence, and suffering that so many human beings… have, for thousands of years, inflicted upon others. Today, in remembrance of the Holocaust and its millions of victims, Nahdlatul Ulama and I wish to raise our voices in a simple, heartfelt call: Let us choose compassion,’” Mr. Staquf said in a virtual event co-hosted by the Los Angeles-based Simon Wiesenthal Center founded to honour one of the world’s foremost hunters of Nazi criminals.

Unlike the Indonesian council and the US embassy in Kuwait’s detractors, Mr. Staquf did not shy away from recognizing the genocide against the Jews while at the same time demanding justice for the Palestinians.

Mr. Staquf made that clear, not only in his call for compassion but also by speaking at an event hosted at about the same time by the Palestinian embassy in Jakarta.

“Palestinian self-determination is a humanitarian mandate. All parties, including Hamas, Fatah, and the world community at large, must set aside their subjective interests and focus upon improving the lives of the Palestinian people. For the fate of the Palestinians is the fate of humanity,” Mr. Staquf said. He was referring to the Islamist group that controls the Gaza Strip as well as the party that governs the West Bank.

The divergence in approach between Mr. Satquf and the Indonesian Council spokesmen is about much more than the Palestinian issue. It is about what the essence of Islam should be in the 21st century, an Islam that looks backward and nurtures grievances or an Islam that seeks to reach out, build bridges, and find solutions.