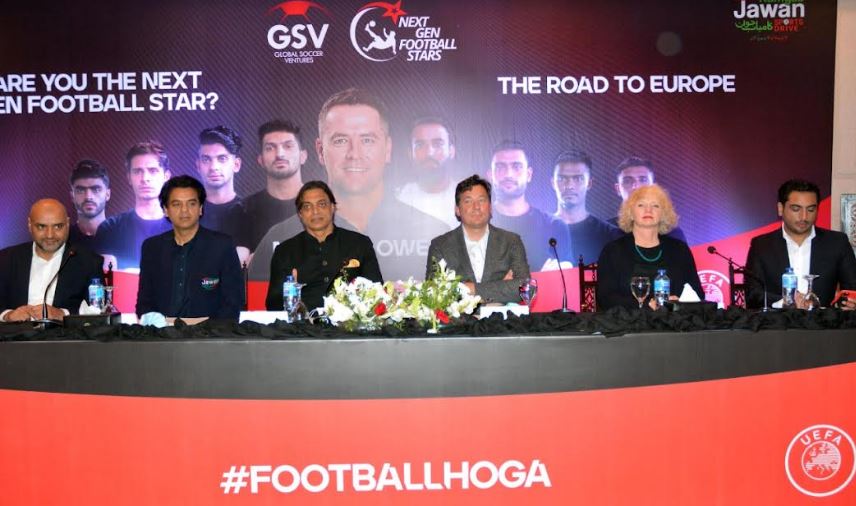 By Our Correspondent
ISLAMABAD, JAN 17: Rawalpindi Express Shoaib Akhtar kicks off a life changing career opportunity for 20 super talented Pakistani football players which launched under the umbrella of Global Soccer Ventures (GSV) NexGen Soccer Trials in collaboration with Kamyab Jawan Sports Drive here on Monday.
The road to UK & Ireland has now become unstoppable with the world’s fastest bowler, Shoaib Akhtar setting his sights to help fast track football in Pakistan. Shoaib Akhtar will also offer a transformational role to help shape the future of football in Pakistan with GSV.
The trials are being heavily invested into by GSV in Pakistan offering the very first UEFA scouting assessment on a national level in Pakistan to talent ID in 10 cities across 11 venues to subsequently offer life changing careers through professional football contracts in Ireland.
The tour also includes 4 master-classes in Karachi, Islamabad, Quetta, and Lahore to develop local football coaching expertise to European standards under St. Patrick’s Football Club development program. At least 15-25 coaches have been selected on merit to attend master-classes to help up-skill their football coaching methods and transfer skills so they become certified train-the-trainers in Pakistan leaving a sustainable roll-out plan under Kamyab Jawan Sports Drive.
Yasir Mahmood, Chairman of GSV said, “Football is here to stay for the right reasons to develop and provide an opportunity for Pakistani players. With Akhtar as an iconic cricket legend well regarded around the world will help play a transitional role in making football become on top of the minds of our nation”.
Zabe Khan, CEO of GSV said, “The only lifeline a player has and that is to play.  Pakistan has seen nothing but football being swiped off its so-called grassroots. I welcome Shoaib Akhtar standing shoulder to shoulder with GSV offering a new hope for Pakistan’s next generation football players”.
Allison Blackburne, British Deputy High Commissioner said: “Football is not just a sport, for many in the UK it’s a way of life, and it would be great to see it become more popular in sport-loving Pakistan. I’m delighted that talented young players here in Pakistan will have this opportunity provided by GSV to learn from some of the best UEFA coaches through St Patrick’s Athletic Football Club”
Karel Freaye, Belgian UEFA licensed coach said, “Football is for everyone and I am looking for talent with potential to develop and grow into professional players in Europe.  I am really excited to see what football technical excellence Pakistan has to offer with football as I see trial registrations rising by the hour”.
Usman Dar, SAPM on Youth Affairs and Chairman Kamyab Jawan Program said, “The revival of sports is the top priority of Prime Minister Imran Khan’s Government. I welcome GSV in their efforts for reviving football in Pakistan. PM’s Kamyab Jawan Program together with GSV will ensure that through football talent hunt we will produce the next football Kamyab Jawan heroes who will represent Pakistan nationally and internationally”.
Garret Kelleher, President of St. Patrick’s Football Club said: ‘It is simply wonderful that the resources are now being put in place in Pakistan to allow football inspiring those with a passion for the game to fulfil their dreams and aspirations just like Shoaib Akhtar has in the world of cricket representing Pakistan at the highest level”.
Zeeshan Yousuf, CEO of itel said: “The world’s most popular sport with 4 billion fans around the world is about ignite Pakistan’s football. It is the most spectacular and universal sport. What excites me the most about this legacy project of GSV is the prospect of changing lives of 20 successful kids will be on a life-changing journey to Europe. Pakistani talent has the once in a lifetime opportunity to get groomed and secure professional contracts to take on the world, as they get set to represent Pakistan internationally. How fantastic is that”.